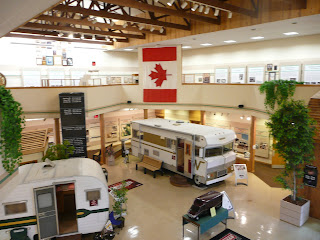 FOREST CITY, IO – Our resting place tonight is in the parking lot of the Winnebago Industries Visitor Center, where up to 14 RV owners are allowed to stay for free for a couple of nights. They even provide electricity and wi-fi, but no water or external washrooms and showers. Still, we are in the perfect spot to catch tomorrow morning’s factory tour, where we will see how the world-famous motor homes are built.

We left the outskirts of Omaha this morning in a steady drizzle that continued for most of our journey east and north. After we reached Des Moines, we left Interstate 80 and switched to the I-35, heading due north. Through the mist and rain, we could see thousands of acres of rich farmland and homesteads every few miles, ringed with trees where the barn, sheds and farmers’ homes stood, with the pickup trucks in the driveways and farm implements stowed out back. There was a comfortable, wholesome look to the landscape, just taking on the fresh green blush of spring, with the moist, brown soil ready to nourish the new crops.

Corn and hogs are two of Iowa’s biggest resources, which are relevant to our story a bit later, and we saw scores of huge wind turbines on various hillsides, churning electricity from their three-armed blades as they slowly traced huge circles in the breeze. They may be useful in contributing to local energy needs, but to me they lack the romance of old-fashioned windmills. Others must think the same way, as we saw a highway sign directing visitors to a real Danish windmill at one point today, but not a single mention of the turbines!

One of Iowa’s favoured sons is actor John Wayne, whose birthplace, De Soto, we drove past today. There are scores of others, such as Mamie Eisenhower, Herbert Hoover, Elijah Wood, and Johnny Carson.

To reach Forest City, we left the Interstate and took state Highway 69 west and north, passing through the town of Clear Lake. I noticed a sign for Buddy Holly Street at one intersection. When we queried this later on the internet, we learned that this was the town where the rock-n-roll star gave his last performance, in February of 1959. The tour bus heater was not working so he and two other music greats, Ritchie Valens and J. P. “The Big Bopper” Richardson, decided to hire a plane to the next venue. Six miles after take-off, the young pilot lost control of the plane and crashed into a farmer’s field, killing him and his three passengers instantly. They call Feb. 3, 1959 “the day the music died”. The site of the crash is marked with a memorial in the shape of Holly’s signature black eyeglasses.

When we arrived at the Winnebago Visitor Center in Forest City, the rain had let up a bit, so it wasn’t too unpleasant getting settled after we had registered inside. Since it was still fairly early, we went over to see the display room and museum, where the history of the factory is explained.

In the late 1950s, Forest City was dying with little else but farms to give it any lifeblood. That’s when John K. Hanson, a local businessman, convinced a California company to open a travel trailer factory. Originally called Modernistic Industries of Iowa when it was incorporated in 1958, it took on the name of the county where it’s located (Winnebago County) not long afterward, and with Hanson’s guiding hand became the immensely successful company it is today. At one point, he advertised that, instead of spending money, customers could trade hogs or corn for one of the new trailers – a gambit that garnered national attention!

The museum displays Hanson’s school report cards and Boy Scouts of America badge sash to illustrate the strong values he applied throughout his life. His wife Luise was a dedicated partner in the business, and both were very community-minded as well. Prior to the recession, the company had more than 4,000 employees, but has downsized to 1,500 to remain in the black. It’s clear there is great pride here in the Winnebago success story.
Posted by Brenda_Zanin at 4:25 PM