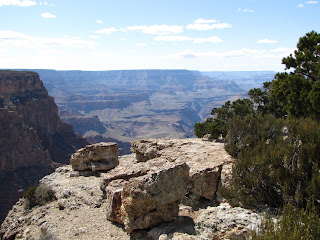 WILLIAMS, AZ – The snow crunched underfoot this morning as we got our day started, so it was a good thing we had disengaged the water hose and ran our faucets dry for the night. Still, it was clear and sunny, as we headed north for our second day at the Grand Canyon.

Our first stop was at the National Geographic Visitor Centre just outside the park, which has some interesting interpretive material about the Canyon, including models and maps, plus an extensive gift shop and an Imax theatre. Val was rattled a bit at having popcorn at 10 in the morning, but what’s a movie, especially an Imax movie, without popcorn?

Dizzying scenes, filmed from aircraft weaving through the canyon, left us gripping our armrests. The show gave us an overview of visitors to the canyon from the first native peoples through the Spanish explorers in 1540 to John Wesley Powell and his adventurers, who first navigated the treacherous rapids of the Colorado River in 1869. Powell was also the first to call this place a “grand canyon”.

The thing that struck me about the Powell scenes was that there were real actors depicting the gut-wrenching ride through the rapids for the cameras, probably having to do several takes before getting it right, using a replica wooden boat and dressed in period gear! Sometimes the boiling current swallowed them entirely before spitting them up in a flash of spray and foam and swirling them further down the channel. Definitely not for the weak of heart.

The final scenes of the movie showed a man in an ultra-light glider sailing silently over the heights, with the whisper of the wind as the only sound. Beautiful! We got to see portions of the canyon that visitors can’t access, so it was a very worthwhile stop.

Once inside the park, we stopped at the Grand Canyon visitor centre where there was more information about hiking, interpretive talks, upcoming weather, wildlife and tours. There is a free bus shuttle that takes visitors to various viewpoints, running every 15 minutes. Some of those routes aren’t accessible by personal vehicle.

After stopping for lunch, we headed back along Highway 64 eastward to pick up where we had left off yesterday. We visited each stop-off point and marveled all over again at the awesome grandeur stretching to the horizon and hundreds of feet below us.

There were lots of people doing the same thing, and we heard all kinds of foreign languages being spoken as visitors posed for photos or exclaimed over the view. We were glad to be here at a relatively quiet period; it must get incredibly crowded at the height of the season. At some stops, we had to drive around twice before a parking space opened up for our truck.

Ravens were the predominant wildlife that we saw. It was amazing looking over the edge and seeing them soaring below us! One cocky fellow hopped right up to Val in the parking lot, and then up onto the rim of the box of our pickup truck, and actually posed for the camera, offering several angles on his sleek, black feathers and fine pointed beak! We saw caution signs by the highway warning of mountain lions over a 10-mile stretch. Val thought it strange that such a furtive animal should be the subject of such warnings. There were also elk warning signs.

Finally, it was time to head back to Williams, as we needed to pick up groceries before the stores closed. The town has a population of only 3,000 and used to be a wild frontier town rife with brothels, opium dens and shootouts. There is still a wild west look about it, with local businesses like Canyon Country Inn or The Red Garter, as opposed to the standard franchises you see everywhere. Another unique aspect are the two parallel one-way main streets, Railroad Avenue heading in to town and the famous Route 66 out.
Posted by Brenda_Zanin at 10:52 PM