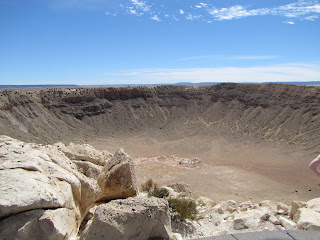 HOLBROOK, AZ – We are now in Navajo County toward the eastern border of Arizona at a KOA near this small town of some 4,000 souls. We are watching the weather very closely as we work out our route; by coming here before heading for the Grand Canyon, we are seeing the sights in this corner of the state (of which there are many), but we are also allowing the passage of time that will bring warmer temperatures near the Canyon.

It will be much more comfortable for us if we can avoid night temperatures below freezing. Even here in Holbrook, it went to 29 degrees last night, but tonight it should only dip to 42, so we won’t have to worry about frozen pipes. It hit a pleasant 76 degrees today — but back in Phoenix and Tucson now, it’s in the low 90s. What a difference altitude makes!

Our main objective today was to move from the Sedona area to this corner of Arizona, and we stuck to Interstates 17 and 40 to do this. The smaller highways are much more scenic, but from exploring them without the trailer in tow, we realized it would be too harrowing to attempt them with the full rig!

Just before lunchtime, we passed some signs advertising the Meteor Crater, with the call letters of a radio station to find out more information. I had seen the crater marked on the map, so we tuned in and heard the spiel about it and decided it might be worth a visit. It was on a six-mile road off the main highway, across a vast, flat plain of dry yellow grass dotted with low scrub bushes.

Off to the west we could see the magnificent snow-capped San Francisco Mountain in the distance, and a huge blue sky brushed with wisps of white cloud. The road was well-paved but narrow, with no shoulders, and I could sense Val’s angst about pulling our big trailer into an area without knowing if he could turn around, let alone get out with it.

We could see the rise in the land which was the rim of the crater, and as we got closer it was clear there would be plenty of room to park and turn around, thanks to the generous parking lot with the pull-through section for RVs and trucks. We parked and ate our lunch before heading to the ticket office to see the crater.

Lots of meteorites break through earth’s atmosphere and fall to earth, but most of the time they disintegrate into very small pieces and make very little impact. However, 50,000 years ago a huge one, about 150 feet across and weighing several hundred thousand pounds streaked down from the heavens and smashed into this flat plain in what is now Arizona, with an impact equivalent to 20 million tons of TNT.

The crater left by that impact is nearly a mile across, and deep enough to swallow the Washington Monument. And what we could see today is pretty well what it has looked like since the flame and dust cleared away on the day of impact. We walked along the rim in a stiff wind that nearly ripped our Tilley hats off despite the chin straps! Way down at the bottom, they have set up a cut-out figure of an astronaut that stands six feet tall. We could barely see it just looking down, but a strategically-placed telescope brought it into view.

Why an astronaut? Well, it was the perfect place for the moon-bound space travelers to train for their explorations, so the Apollo crew came here do to just that.

There was a very informative museum next to the crater that helped explain how meteorites are formed, and where some of the biggest ones have landed. The meteor crater in Sudbury is the second largest in the world, according to this display, measuring some 200 kilometers across!

It was a very worthwhile detour. Our map indicates a whole lot more which we look forward to seeing from our new vantage point.
Posted by Brenda_Zanin at 9:09 PM

Hi...still following your journey and with our arrival in Ottawa last Sunday, are very jeleous...wish we could have stayed in AZ a little longer for more adventures. We just had supper with Scott and Tanya, they are well and miss you. We head to CB on Friday morning. Make sure you save some exploring for next year when we are back there. Keep enjoying your adventure...D & S