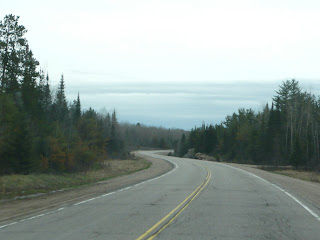 OTTAWA, ON – I’m sitting in my own easy chair at home, for the first time since February. We’re home! The forsythia has bloomed out front and the hyacinths are up, and the cardinals were singing their hearts out in the back yard. There was a lovely azalea plant and a bottle of bubbly from Mum waiting to welcome us home, and we were greeted by two neighbours with waves and ‘welcome home’s. It’s great to be here!

We left North Bay this morning just after 7 am, heading down the Trans-Canada Highway in a gentle drizzle of rain. Although it delayed us somewhat, we were glad to see some road work under way as we drove along, because there was a lot that needed fixing. We hit quite a few rough spots that made our dishes jump in the trailer and tossed our shoes onto the floor from the storage tower by the door. The last of one set of glasses flew out of one of the cupboards and smashed into pieces. We are convinced now that elegant plastic glasses will be required for our new RV when the time comes!

It was lovely to see more lakes and pine trees as we covered the familiar territory between the north and Ottawa. There were still clumps of snow in some areas, the last vestiges of the winter we left behind. As we got closer to Ottawa, I suggested Val put in his order for the rain to stop when we were getting the trailer settled in its temporary resting place at Long Island Camp. He has an uncanny way of staying dry on rainy days when he has to be outside!

Sure enough, we got to the camp with the objective of emptying our holding tanks and parking the trailer, and the few sprinkles of rain dried up for all those steps! It almost never fails.

We grabbed a few essential items that we wanted to take out right away, such as the contents of the fridge, and headed home. It was great to turn the corner and see our lovely house again! Our priority was to go and vote in the federal election, which we got home just in time to accomplish!

In all, we covered more than 16,000 kilometers, some getting from state to state and some driving around locally wherever we were. We traveled by truck, train, helicopter, jeep and bus at various points. We got as far south as Nogales on the Mexican border and as high as 11,158 feet elevation in the Rocky Mountains of Colorado. We experienced ice and snow as well as heat in the 90s. We saw amazing natural wonders and significant man-made structures. We met wonderful people who smiled and chatted, offered advice, helped us out and taught us new things. We saw stellar performances. We admired works of art and beautiful native crafts. We saw inspiring sunrises over Monument Valley and flaming sunsets in Sedona. We were blown by fierce winds and caressed by warm sunlight. Our memories of this trip will be with us for years to come, and already we are looking forward to the ones to come in future trips.

We hope you have enjoyed our travelogue over the past nine weeks. My evenings will be different without a half-hour writing session and photo upload each time! You can use the “comments” feature on this blog to let us know what you think (and thanks to those who have done so!). And so, until the next time, happy trails to you!
Posted by Brenda_Zanin at 2:47 PM 1 comment: 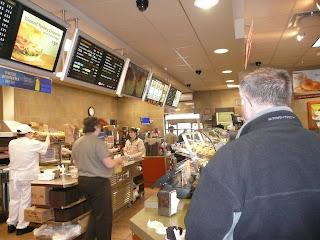 NORTH BAY, ON – Wind and more wind! Great gusts have buffeted us yet again this evening, as we strolled across the road to a restaurant from our hotel, situated next to the Dionne Quintuplets museum and North Bay Chamber of Commerce. That’s where we were allowed to leave the truck and fifth wheel for the night, visible to us from our hotel room window. The little museum is the original wooden homestead where the famous quints were born in 1934.

Despite the fact that the hotel in Sault Ste. Marie was full of kids involved in a hockey tournament last night, we got a good night’s rest and woke early. We waited till the breakfast room was open for our free meal, and then headed out into a steady downpour to resume our journey.

The low cloud ceiling and heavy rain made it quite dark for the first part of the morning. By the time we got to Espanola, though, it had lightened up, and the rain abated after a while. Val was delighted to catch sight of a Tim Hortons with enough parking space for the rig. I asked the attendant to wash out Val’s commuter mug well before filling it with Tim Hortons coffee, because we had been out of the country for two months drinking other types of coffee, and we didn’t want to adulterate that wonderful flavour with something else.

We bought our lunch to take along so we didn’t have to take a lunch break as we headed toward Sudbury and North Bay. It really felt like home to look at the great rocks of the pre-Cambrian shield by the side of the road, the tall, asymmetrical pine trees, and blue lakes and rivers that are so prevalent here in the north. When we stopped to refuel, the attendant told us to watch out for deer on the road ahead, but I guess they stayed in the woods to keep out of the rain, because we didn’t see any.

It was interesting to see the landscape around Sudbury, which in earlier years had resembled the surface of the moon because it was so barren. Now, there are lots of birch trees and poplars, with no impression of blight that used to epitomize this part of Ontario. The bypass highway didn’t allow us a glimpse of Sudbury’s giant nickel; one of these days we will take the time to visit the city’s science museum and learn a bit more about the giant meteor crater where Sudbury is situated.

Finally, we saw the first glimpse of Lake Nipissing and the outskirts of North Bay. We had a list of several hotels here that we were going to drive by, to see if the parking lots had room for us. But as soon as we saw the Holiday Inn here, we found what we needed and turned in.

Our return to familiar Canadian icons continued with supper at Don Cherry’s across from the hotel, complete with Stanley Cup playoffs on the TVs, Italian for Val and Chinese for me, ending with a cup of Red Rose tea. Only in Canada!

There’s only one more day to go on our fantastic trip. But being here in North Bay almost feels like home, considering the hundreds of times we have been through this area over the last 40 years.
Posted by Brenda_Zanin at 4:10 PM No comments: