At the edge of the Abyss 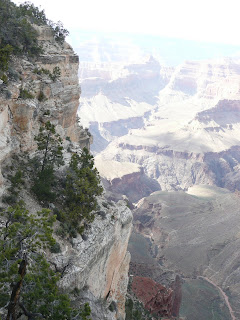 WILLIAMS, AZ – We had to walk briskly from the parking lot to the Yavapai Geology Museum in Grand Canyon park, to make the 10 o’clock geology talk. Lucky for us, Ranger Mike was chatting with the handful of participants and hadn’t actually begun his spiel yet.

Although geology can be a pretty dry subject, Ranger Mike did an excellent job of livening it up. At the same time, he gave us a much better insight into how the Grand Canyon came to be the way it is. He said a better adjective than “grand” for this canyon would be “unique”, because there are other canyons larger than this one, but unlike them, much of the Grand Canyon’s evolution is visible to the naked eye in the unmistakable stripes of limestone, sandstone, schist and shale from the top to the bottom.

Mike also explained the role of water erosion, the movement of tectonic plates, and the tilt of layers here that made water flow more forcefully, deepening and widening the canyon over millions of years. He compared that tilt with a long downhill highway with the police at the bottom with a radar gun! He said you could imitate the formation of a mountain range quite well by ramming your vehicle into a tree. Like I said, he livened things up!

The wind began to really pick up by the end of the nature walk, and Mike had to remove his straw stetson lest it fly over the edge. We went in to the geology museum afterward with its very informative displays, dioramas and picture windows over the canyon.

Our next item on the agenda was booking a helicopter flight. At the heliport, we learned one would be available at one o’clock, so we signed up. We ate our picnic lunch in the truck, because it was still blowing quite briskly outside. It was actually a relief, at flight check-in time, when they told us were canceling flights for the rest of the day due to the high winds. So we’re rebooked for tomorrow morning.

The change in plan brought us back into the park to take the free shuttle through the route where public vehicles are not allowed to go. This followed the rim of the canyon in a westerly direction, stopping at nine different points, each with a different view. Between each point were walking trails of various lengths, so you could choose to take them or wait for the next bus.

From the Trailview Overlook, we were able to see hikers wending their way up and down a trail that zig-zagged way down into the canyon. They looked like ants from our height! The signs and literature advised against attempting to go all the way down and back in one day because of the risk of exhaustion or even death. We were aghast, therefore, to hear from a young man on the shuttle that he had run down and hiked back in about seven hours.

Our hiking was of a far gentler nature, covering about a mile and a half between three points along the bus route. The high altitude takes getting used to, and even with very mild rises on the path, we huffed and puffed a bit. Sometimes we were right on the very edge of the rim, which made Val grateful for the railings, especially when there were stronger gusts of wind. Some parts were not railed, however, causing some angst! The views at every stop were spectacular.

The Abyss was the name of one viewing point where the drop was just about vertical. Every now and then we caught glimpses of the blue-green Colorado River at the bottom, sometimes flecked with white rapids. Val’s super lens on his camera caught some great close-ups of those parts.

The end of the route was at Hermits Rest (yes, the lack of an apostrophe did annoy me!), named after a Canadian prospector, Louis Boucher, who came to the Canyon in 1891 and worked on developing some of the trails. There was a lovely stone building there with a huge fireplace inside and a snack bar where we warmed up with hot chocolate and coffee.

On our way home, we stopped in Tusayan, a village just outside the park, for a nice steak dinner in the Grand Hotel before heading back to Williams. A great end to a terrific day.
Posted by Brenda_Zanin at 9:31 PM