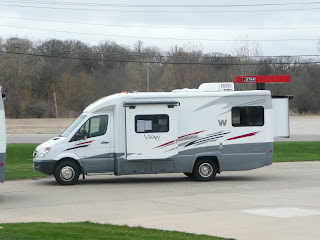 Thursday, April 28, 2011
HAYWARD, MN – It has been quite a day!  After a chilly night under an extra blanket, with only a “milk barn heater” for warmth, thanks to our new friend Chad from last night, Val was up and on his way by 8 o’clock to fill the propane tanks.  At the same time, he looked up the repairman Chad had mentioned, to us to see if he could help us find out what exactly our propane problem was.
We battened down the trailer, hitched up and headed over to the RV dealership for our morning appointment, and Ken, the propane repairman, arrived in his truck right behind us!  He got to work right away, and was still at it when we had to go inside.
Casey, our sales rep, was in her office when we arrived, having done all her homework from yesterday afternoon.  She said it would probably be best if we sold our truck and trailer on our own rather than selling it to them, and we were quite happy with that.  Then she quoted a price which was literally thousands of dollars less than we had anticipated!  We were blown away, and to make a long story short, we bought the new motorhome with a deposit, with the balance due on delivery in a couple of months when the unit is built.
So we are turning a page in our RV experience, saying farewell to the fifth wheel and truck in exchange for a 24-foot, 2012 Itasca Navion iQ, built in Forest City at Winnebago Industries.  We are thrilled!  It has two slides, one for the sofa and one for the bedroom, which includes a queen-sized bed.  We’ll have a microwave convection oven, bathroom with shower, a diesel generator, even a TV, and all in a very compact vehicle.  We’ll be flying back to Forest City in the summer to pick it up and drive it home, and the dealers will have all the paperwork done for its transfer into Canada at that time.  It’s all very exciting.
When our business was all attended to, we went back out to the truck and trailer, where Ken had left a note saying there was more work to be done on the propane system, so we drove to his offices and parked outside.  It was bitterly cold as he laid down on the ground and pulled out a piece of pipe and connector.  He had discovered a leak in the pipe that fed our furnace, caused by a couple of tiny cracks that he attributed simply to old age.  We took this to be a sign that we were due for a new RV!
It was lunchtime by this time, so we stopped at a nearby café and celebrated our purchase, and the promise of warmth once again in our trailer, over Reuben sandwiches and hot beverages.  Then we were on our way, aiming for a KOA not far away in Minnesota.  Once we were set up there, we turned on the furnace and were delighted to feel warm air coming through the vents!  Good thing, too, because it was still only 47 degrees outside, next to the cornfields and highway nearby.

After studying our maps and mileages, we’ve figured out a route that will make up for a lost day and get us back to the travel schedule we had originally planned.  We are looking forward to getting home!
Posted by Brenda_Zanin at 3:32 PM