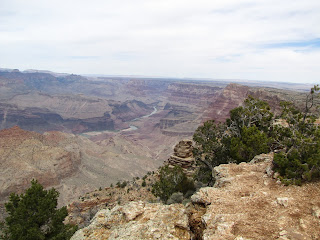 WILLIAMS, AZ – Outside our trailer in this KOA park, clumps of snow are everywhere! The sound of trickling rivulets of melted snow is comforting, indicating that what we are seeing will be short-lived. Williams is 29 miles from Flagstaff, and we knew that town had received a dump of eight inches a couple of days ago, so we weren’t exactly surprised, but it’s not the kind of scenery we drove 2,000 miles to see!

We had a longer drive than usual today – about 260 miles – so we got up early and were rewarded with our last breathtaking sunrise behind the monuments. We headed south into Arizona again, and westward on Highway 160. There were still some massive rock formations to see as we continued on our way, as well as lots of flat land. In some places the land was so devoid of vegetation it almost looked like a moonscape.

Scattered throughout this area were Navajo homes, but none of them were close enough to others to be able to call them villages or towns. We did pass through Tuba City before turning south to Cameron and then west again toward the Grand Canyon.

A sign for a scenic viewpoint drew us off the highway shortly after we left Tuba City. The Little Colorado River – one of the tributaries of the Colorado River which flows through the Grand Canyon – could be seen from this vantage point.

In order to see the view we were channeled through a mini-market of Navajo crafts. Compared to some other markets we had seen, this array of wares, their variety, and the artistry that went into them, really impressed us. We made several purchases before walking down the path to the rim of the chasm.

It was very deep, with a sheer drop of several hundred feet and the brown river meandering at the bottom. We could hear the rushing water, even though it didn’t appear to be flowing very fast. When I raised my eyes to ground level and looked toward the horizon, it looked as though a huge knife had cut a jagged slash into the flat land.

As we drove away after eating some lunch, I wondered out loud whether, having seen so many amazing canyons in various parts of Arizona, the Grand Canyon might be less striking than it might have been if we’d seen it first. Time would tell.

Finally, we spotted the signs for the Grand Canyon and turned on to Highway 64. We soon came to the entrance gate and congratulated ourselves once again for purchasing an annual pass to all US National Parks, which gave us entry at no extra charge. Armed with maps and brochures from the park ranger, we headed on.

The Desert View stop was the first one inside the park and Val was happy to see the generous parking area allotted to RVs and buses. We took a quick peek in the visitor centre and then walked down the path to see the view, noting the large patch of snow by the path as we went by.

Then, there it was. Spread out as far as we could see was the most awesome vista of buttes, mesas, and chasms, striped in colours of purple, pale green, orange, brown, sand, grey and black, and far, far down at the bottom flowed the Colorado River like a turquoise ribbon. I was completely overwhelmed, to the point that I actually began to cry. I simply could not believe what I was seeing, and how far it surpassed all my expectations!

After regaining my composure, we went to get an even better view from the top of the Watch Tower, an amazing structure built in the 1930s with an inner spiral staircase to the top. The inside walls are decorated with native paintings, and there are several landings with windows overlooking the canyon.

With several days planned to take in the Grand Canyon, we decided to forego other stops – especially since we had the trailer still attached behind us – until we got settled in Williams. But we did catch more awesome glimpses on the way, which simply whetted our appetites for more.
Posted by Brenda_Zanin at 8:13 PM