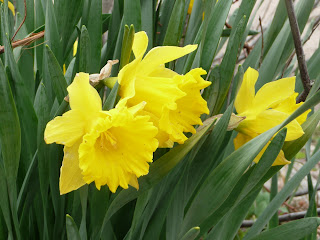 GOTHENBURG, NE – The Easter Bunny had a bit of a challenge finding the usual goodies to deliver to the Zanins’ home on wheels. Still, as Easter dawned in this sparsely-populated KOA campground, a small display of tasty treats did materialize on the dining table, albeit arrayed on a grass-free, hand-decorated paper plate. The Easter Bunny is not easily dissuaded from accomplishing the appointed tasks of the season.

More challenges were ahead this festive morning, however. I had searched on line and in the local newspaper for an Episcopalian church. We left in good time for the 11 o’clock service, driving to Cozad, 10 miles down the highway (since Gothenburg had every denomination but), and following the GPS instructions from the address we plugged in.

The GPS announced we had reached our destination, but we were in a neighbourhood where no church was anywhere to be seen. So, we drove around till we found a church (Baptist, I think) that was obviously in session and I went in and caught the eye of a sidesman, who kindly came out from the service to see what my problem was. He was able to give me directions, so I trotted back to the truck and we headed off again.

With five minutes to go before 11, we spotted the building and parked. When we opened the church door, we realized the service was well advanced, and several people turned around to look at us. Clearly, we had been misinformed by the newspaper, and had almost missed the whole thing! Less than 15 minutes later, the service was over. I explained to the minister why we were late, and she said she hadn’t seen the ad to know it was wrong. She kindly offered to give us a hymn book so I could go over the hymns we had missed, but I said I knew them by heart anyway!

Back at the trailer, we got into relaxing clothes and started working out our route back home. We have to figure out what spot to aim for that’s within reasonable driving distance, and then find out whether there are RV parks that are open this time of year where we might stay. As we get further north, this becomes more of a challenge! Most don’t open before May 1.

Without that option, we have to find a hotel or motel with a large enough parking lot to take our big, 32-foot trailer plus 22-foot truck! That will involve some research and some phoning. Challenge #3: our cell phone has not provided service for some time, although Val had arranged for full service in the US before we left. So we have to find phone booths at locations where we can park the big rig while we make the calls. It’s a lot of work, this holiday of ours!!

To take a break from our figuring and research, we went out for a nature walk along the Platte River, which is gliding swiftly past the campground. We spotted some ducks on the water, and I enjoyed the wildflowers that are popping up on the shore. I also snapped this picture of daffodils. After walking a short distance, we were swarmed by clouds of cluster flies, so our stroll was not a lengthy one.

We decided to treat ourselves to a restaurant meal for Easter dinner, so we headed west again to North Platte, a larger town that had several restaurants that were likely to be open on Easter Sunday. Our search was successful, and we had a tasty meal complete with a yummy dessert.
Posted by Brenda_Zanin at 7:30 PM