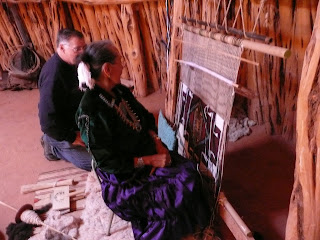 MONUMENT VALLEY, UT – This tiny community consists mainly of the Goulding complex – an inn, restaurant, service station, grocery store, museum and RV park, all under the Goulding name – plus a Navajo craft market, high school and the visitor centre and hotel for Monument Valley. The only church is the small Seventh Day Adventist church that has services on Saturday, so I wasn’t able to attend a service this morning.

So, since cleanliness is next to godliness, we did a thorough cleaning of both the truck and the trailer instead! There were small deposits of red sand on all the windowsills in the trailer, as well as on the backrests and dashboard of the truck, and lots of other places, so we had our work cut out for us. I also did the weekly laundry at the campground coin wash to get the grit out of our clothes. There were moments when the sandstorm was in its full fury the other day when we could even feel grit in our teeth.

With everything all spic and span again, we had lunch and then headed out to see the last couple of things in the area. There is a Navajo market near the entrance to Monument Valley, with three rows of shops that look fairly new, and a generous parking lot. Several shops had signs saying “We are open!” and “Come on in!”, but in fact they were locked and dark.

There were six or seven shops that really were open, so we went in to see what they had to sell. A young Navajo man was at the first one, and while I browsed around looking at necklaces of silver and turquoise, beaded bracelets, dream catchers and other handicrafts, Val struck up a conversation. When the young man heard we were from Canada, he said he had visited from Montana where he had gone on a school exchange. He wants to move to Montana some day. As he explained, putting his hand to his heart, his responsibilities here keep his spirit fettered, but when he was in Montana, he felt his spirit take wing and soar.

Another shop was closed when we got to the door, but the owner was close by so he came and opened it up. He was older, and his brown skin was weathered on his face. In his store were many beautifully-decorated plates and vases, and he was working on more which he took out to show us. He had carved feathers and designs into the sandstone-coloured plate, and his paints were set out so he could add colours when the carving was done. In his glass case he had several blue ribbons, awards for his handiwork, and he had newspaper articles posted on the walls with pictures of him as a younger man, describing his work. He had quite a sense of humour, and began to imitate the British and German accents of tourists who came to his shop!

We browsed in several other shops where we enjoyed more conversations. One older Navajo woman told us her husband had just retired, so he was taking care of the horses and sheep at home while she tended the store. They wanted to travel, but it would be hard to find someone to care for the animals if they were to leave.

On our way back to the campground, we stopped to see a hogan that displayed a sign saying “Open 8 to 4”. There were no other vehicles parked, but we thought we could at least have a look at the outside of the structure. It was dome-shaped and covered with dried red mud. At the top was a chimney pipe, and we caught a whiff of wood smoke coming from it, so we tried the wooden door, and it opened. Inside we found Bessie, an elderly Navajo woman, quietly seated at her loom near a central wood stove.

She welcomed us in and showed us the blanket she was making, and explained how the hogan was built. It was surprisingly sturdy inside, made of large logs set vertically at the base and then laid out horizontally in a hexagon shape as it formed into a dome. There was a display showing the different plants they use to dye the wool for their weaving. Bessie had a striking face and was decked out in a deep green blouse and purple skirt, with beautiful turquoise and silver jewelry around her neck and wrists.

We didn’t have a charged agenda today, but it was very nice to have time to really converse with the people of this beautiful land. Our lives are so different, but we have so much in common.
Posted by Brenda_Zanin at 6:18 PM