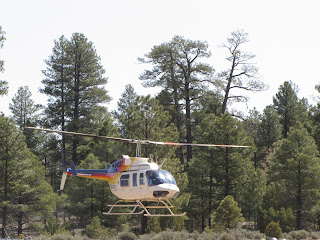 WILLIAMS, AZ – Last night’s stiff gale had quieted to a gentle breeze when we got up this morning, so we were looking forward to our view of the Grand Canyon from the sky as we headed for the heliport.

A steady thrum of helicopter blades came through to the waiting lounge from outside, as one craft after the other landed or took off. Grounds crew with bright yellow earmuffs escorted passengers out for their flights, after cinching a belt with an inflatable PFD in a pouch around their waists.

Seats were assigned according to each person’s weight, which was taken at the check-in desk when we bought our tickets. I was hoping I wouldn’t get the only middle seat on the helicopter. You weren’t allowed to switch seats.

Finally our names were called and we were escorted onto the tarmac. Happily, I got to sit at a window, facing backward, but also facing Val, so no complaints! On this flight, the middle seat wasn’t even used, so it didn’t present a problem for anyone.

Our pilot called herself Bec, and spoke to us in a high-pitched, little-girl voice that added no gravitas whatever to her leadership role! Our headsets filled our minds with recorded music to start with, and then a narrative about what we were seeing below us. At first, it was just trees by the acre in the Kaibab National Forest that’s adjacent to the Grand Canyon National Park.

Then, as we approached the rim, our ears were filled with the opening bars of Also Sprach Zarathustra, the theme music to the movie 2001: A Space Odyssey, reaching the first cymbal-clashing climax just as the flat treed land dropped away into the abyss! Wow! It was a thrilling sight, augmented all the more by those majestic chords.

Bec carried us eastward along the Colorado River, flowing green at the bottom, to the point where it was fed by the Little Colorado River, which was the colour of café au lait. It was neat seeing the two colours blend together. We also caught sight of some tiny dots on the river: people in inflatable boats heading for a white-water adventure on the rapids.

From there, the helicopter swung toward the north rim, a much snowier place than the south, where we could glimpse sections of highway, mostly snow-covered, but bare in enough places to see that it was highway. It won’t open to the public on that side till some time in May.

We saw some wonderful formations, like the Battleship, and Dragon’s Alley, where the row of pointed ridges looked like the spiny plates on a dragon’s back. There were also peaks of rock with different coloured layers that looked like rings of rainbow stripes from above. We were in flight for 45 minutes, but it went really quickly. It was fantastic.

Back on terra firma, we drove in to Grand Canyon National Park one more time, stopping at the entrance to get a picture in front of the big sign. Val also wanted to check out the campground in the park for future reference. They have sites big enough for a fifth wheel, but as the season gets busier it can be hard to get a spot. They do take reservations, however. Now we know!

After a rather chilly picnic lunch (it was only about 47 degrees), we set off in search of the mule stables that we had seen yesterday from one of the distant viewpoints on the rim as we looked into the village. We’d never seen a mule up close.

We did finally find them, penned next to a large barn. They look like sad creatures, with heads low and dull-looking eyes, but they also look very sturdy and well-suited to carrying packs up and down the canyon paths.

There was a nature talk we tried to get to, but we couldn’t find a parking spot anywhere for the truck, so we relegated that experience to our “next time” list and headed back to the KOA, bidding a last farewell to one of the wonders of the modern world.
Posted by Brenda_Zanin at 8:28 PM