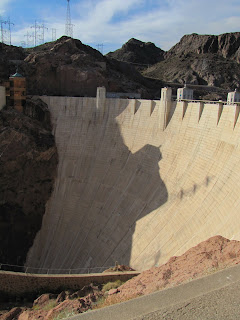 LAS VEGAS, NV – When you think of a KOA campground, you would probably never think of one quite like the one we’re in tonight. We are one block back from “The Strip” – the most visited street in this huge city, and through every window of our trailer you can see the flashing neon lights of enormous hotels and casinos. Overhead is the buzz of helicopters taking visitors over the city to see the lights from above. We’re right in the thick of it!

The drive from Kingman was not long. We followed Highway 93 over the westernmost section of Arizona, and crossed the brand new Hoover Dam bypass bridge into Nevada. Before last October everyone drove over the dam itself, but now the bypass handles most traffic. Despite being so close to the dam proper, people crossing the bridge are unable to view it. That probably has prevented quite a few crashes.

We stopped at the visitor centre in Boulder City next to the dam, but were dismayed to discover it was closed on Saturday and Sunday! Without a clear idea of how we could visit the dam with our RV in tow, we decided to carry on to Las Vegas, settle the trailer, and return unencumbered after lunch. It was only a few miles from town anyway. That was the plan.

On we went to the big city, and there it was, spread out in all its glory across the Nevada desert, ringed by mountains under a bright sky. Towering skyscrapers rose near the city centre, and huge signs blazed out exotic names. There were castle turrets, pyramids, even palm trees with their fronds tied into onion shapes to capture the eye.

We managed to find Circus Circus, the street where the KOA was located, got in, registered and set up the trailer on our site. After a bite of lunch, we headed out again. Working with the sketchy maps that the KOA provided, we found our way onto the highway out of town. As the designated navigator, I felt comfortable we were headed in the right direction because we were passing sights we’d seen on the way in. There was the castle – and oh, look! There’s another monorail! Wow!

On we went, and then Val remarked how strange it was that we hadn’t seen any signs for the Hoover Dam. That’s when I realized I wasn’t recognizing things any more. This was new territory. In my bedazzled state, had missed the point at which the merged Highways 15 and 93 split. We were headed south to California instead of southeast to Boulder City. I had earned a well-merited place in the doghouse.

Scrambling to find a way back to our destination, I studied our atlas and found an alternate route. We had to head into California, turn eastward across the desert back into Nevada, and then north to Boulder City. It was a very long detour that ate up a couple of hours and who knows how many gallons of diesel fuel. One saving grace was a fascinating stretch of highway called the Joshua Tree Highway, with hundreds of the twisted, tufted trees on either side of the road.

We made it to the Hoover Dam in time for one of the last tours to see the power plant underground. They showed us a fascinating film about the construction. They said if all the concrete that went into the dam had been made into a sidewalk four feet wide, it would have reached all the way around the equator. Engineers had to figure out a refrigeration process to get the concrete to cool in reasonable time, because otherwise it would have taken a hundred years. There were all kinds of other challenges they overcame.

The dam brought many benefits. Chiefly, it brought control over the wild Colorado River so it could be kept from flooding and used for irrigation and power generation. Also, the thousands of jobs it created were a welcome relief for the many unemployed people in the Depression.

Once we’d had the tour of the inner workings, we were able to walk across the top of the dam and take in its great height as well as see Lake Mead on the upper side of it. It gave us a real appreciation for this amazing feat of engineering.
Posted by Brenda_Zanin at 9:42 PM