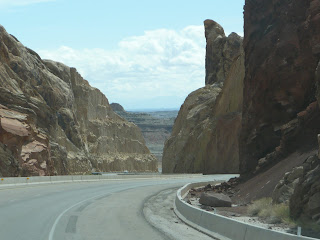 GRAND JUNCTION, CO – Our trailer is once again being buffeted by strong winds that are causing the trees outside to hiss and wave. Grand Junction is just inside the Colorado border, next to the brown Colorado River and ringed by mountains. It’s a fairly big city that boasts several big box malls, which we passed on our way to the KOA campground.

We had a rather uncertain start to the day, as we had to take the trailer to the Flying J truck plaza for a look at one of the tires. I had noticed that it was looking softer than the others, which certainly shouldn’t be happening to brand new tires. Val checked the tire but couldn’t find anything obvious, but when he and the service attendant went to look again, they both spotted the nail at the same time. It must have been hidden under the soft part of the tire when Val looked earlier.

The nail was bent in half and looked very old, with a square head and a very thin shaft. They pulled it out and inserted a plug, tested it for air-tightness and brought the tire pressure back up from 40 psi to the proper 80. Anyway, it was quickly done, so it didn’t affect our planned destination at all. We had visions of having to remove the tire and put on the spare, but this should last us till we get back.

After about 20 miles on Highway 15, we turned eastward onto the Interstate 70. The landscape was very reminiscent of Canada, with green grassy plains, small rivers, deciduous trees and beautiful mountains. We thought we had left the desert behind finally, but we were wrong!

First, we passed through Fishlake National Forest, with a steady climb between high rock formations and mountains, some of which had snow on top of them. Then, shortly after crossing the Dirty Devil River, we found ourselves descending into Sinbad Valley, a huge expanse of desert-like terrain with gigantic rocks and cliffs, and almost no vegetation except the scrubbiest of plants. Some of the rocks were scraped into swirling stripes by centuries of wind, looking like mounds of mashed potatoes! Again we could see on the cliff and mountain walls the sedimentary stripes of white limestone, red sandstone and layers of other colours.

As we continued eastward, we passed deep gorges that resembled the Grand Canyon. The highway signs indicated that Canyonland National Park and Arches National Park were off to our right – and worth a visit, certainly, on a future trip to these parts. As it was, we enjoyed what we could see from the truck windows.

We did turn off at a viewpoint to stretch our legs and look at the amazing vista of rocks and gorges. Some Navajo vendors had laid out their wares on the ground – beaded necklaces and bracelets, rings, earrings, and horsehair pottery. Some of the pieces were lovely. The elderly Navajo lady we spoke to said they were from Arizona, so they’d come quite a way to try and sell their goods.

After lunch, we carried on, gasping in amazement as we turned a corner to another breathtaking view of plains and mountains. Huge clouds were developing in the sky, like puffs of cauliflower with deep grey underbellies. Some of them were shredding into rain showers in the distance, but we never caught up to the rain.

That is, not until it was just about time to get out at our campground. I scrabbled around retrieving my jacket and putting it on for protection from the spattering we were getting, but just when we pulled in and stopped, so did the rain! Let’s hope we don’t get blown to Kansas overnight.
Posted by Brenda_Zanin at 6:13 PM