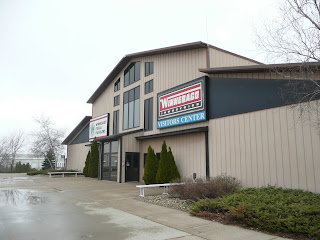 FOREST CITY, IA – We were up and at it promptly today to take the tour of the Winnebago Industries complex. It started with a film showing how the motorhomes are constructed. The thing that impressed me most was how many components are manufactured on site. Very little is made somewhere else and assembled here.

They extrude their own aluminum from pellets to make frames; they have a stitchery building where workers sew all the bedspreads, cushions, car seats and curtains; they have cabinetmakers who make and hand-finish all the cupboards, closets and paneling; electricians who string all the wiring; specialists who liquefy plastic pellets and twirl the result in molds that produce seam-free shower stalls and other plastic components – the list goes on and on!

One of the things that Winnebago does import is the chassis. We saw rows of them – basically four wheels, a frame and a motor, from Mercedes-Benz, Ford and Freightliner, and Winnebago cuts them and welds pieces in to make them longer if they are to be used for motorhomes longer than 24 feet.

Terry, our guide, took our little group of eight on a bus through the entire campus of buildings, and in several buildings we went upstairs to a mezzanine level to look down on the assembly line. When they introduce a new design, they make a full-scale model entirely of clay and get a computer to “read” all its contours so it can be reproduced exactly in the appropriate materials. The whole tour was fascinating, and we learned a lot. It was clear that the company aims for the highest quality at every stage of the process – very reassuring when you are thinking of buying one of their units.

Which is exactly what we are doing. We’ve had the fifth wheel for 10 years and are ready to get something newer, simpler and smaller. So, after lunch today we went to the local Winnebago dealer to see the model we’ve been eyeing and find out how to get the best price while meeting the requirements for taking a US unit into Canada. You can save thousands by getting a unit this way. It was an interesting afternoon with Casey, the sales rep, a young woman who knows the product well and showed us all its features. We even went for a test drive and I took the wheel for a time (which I never do with the fifth wheel!) and found it quite driveable!

We’ll be going back in the morning to hammer out the details, so we left Casey and came back to the trailer. That’s when we discovered the propane furnace had pooped out. Though the two tanks seemed full, no heat was coming into the trailer, nor could we light the gas range. We went out to find a phone to call some dealers we’d located online and stopped in at a gas station. The attendant and one of her customers offered several options and let us use their personal phones. We couldn’t reach anyone after hours but thanked them for their help.

Then we went on to find a diesel fuel station to fill up the truck, and while we were doing so, a man in a pickup truck pulled up and asked if we were the folks with propane problems at our trailer! He’d heard about it after we left the gas station and came in to town looking for us! He offered to lend us an electric heater for the night and then drove to his place to get it and bring it to our trailer. It turns out he’s director of marketing for Winnebago, and he said we could leave the heater at the Visitor Center in the morning where he’d pick it up.

When he came with the heater, Val showed him the tanks and the regulator, which he figured was the source of the problem. But he also discovered that the tanks were, in fact, empty as well. So Chad, our new friend, went back home a second time and brought us a small propane tank to supplement the electric heater! He insisted he knows what it’s like to run into problems when on the road and left it at that. We were amazed at his generosity and kindness. We will not forget Forest City for a long time!
Posted by Brenda_Zanin at 6:34 AM