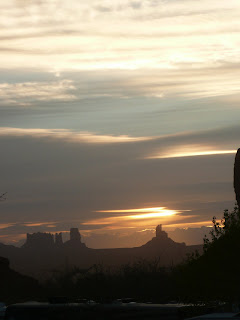 MONUMENT VALLEY, UT – When I opened the blinds of our picture window along the back of our RV this morning, a spectacular scene greeted me — sunrise behind the perfectly silhouetted rock formations of Monument Valley! The dust storm and winds had completely obliterated that view when we set up here yesterday, so it was a wonderful surprise.

After a short trip out to get more propane and a few groceries, which were both available within the Goulding complex, we headed over to see the little museum that is housed in the original homestead of Harry and Leone (“Mike”) Goulding.

The ground floor of the two-storey building was the trading post, and when we went in, to the clang of a cowbell over the door, the front room looked much like it did in the 1920s, with a scale, a pot-bellied stove, wooden floors and counters, and vintage tins and boxes on the shelves.

Original pages from the guest register in the 1940s were displayed in plastic holders so visitors could flip through them. On one page dated 1942 was this message: “Harry, you and I owe a lot to these wonderful monuments. Duke.” – written in John Wayne’s own hand.

The other ground floor rooms displayed photos of the early days, paintings and photographs of Monument Valley, as well as Navajo pottery and blankets. We sat down to watch a documentary about what happened to the Navajo people when the settlers arrived; it was a sad story of massacres, starvation and forced marches as two cultures clashed and one gained the upper hand.

Upstairs was the Goulding’s original apartment, fully furnished with a wood stove, stone fireplace and lots of pictures and paintings of Monument Valley. It looked very cosy. In one room were more pictures of events in their lives, plus a tribute from President Ronald Reagan for their dedication to the community and the work they did among the Navajo people.

At lunch at the hillside restaurant beside the museum, we both ordered Navajo fry-bread; it’s a batter made from flour, water and baking powder that’s deep fried into patties the size of a lunch plate. It was crisp, golden and full of large bubbles. We cut off wedges, which I dipped into my cheese-and-broccoli soup and Val into his stew. Then we drizzled honey on the remainder which served as our dessert! Melinda, our waitress, told us the health clinic has advised people not to eat too much of it, and we could see why as we licked our greasy fingers.

After lunch we drove to the park entrance of Monument Valley and stopped briefly to see the visitor centre. It had a display about the Navajo Code Talkers from the second World War, and what a vital role they had played. It struck me that those soldiers displayed tremendous grace on the part of their people, to serve the country that had dealt so cruelly with their ancestors.

Back in the truck, we headed out to see the monuments close up. The dirt road across the valley floor was quite rough, so we had to take it slowly, but it took us between and around many of the iconic formations, with signs indicating their names: the Sentinel, the Three Sisters, the Camel Butte, Elephant Butte, Totem Pole. They were huge! Enormous boulders were strewn around the bases, among the red sandy dunes and short, twisted trees. Between us, we took more than 200 pictures today! It was thrilling to see such an amazing place.

Our drive took about two hours. It was quite chilly – the thermometer in the truck never made it to 50 degrees. Just after we got back to the trailer, we looked out to see billows of snow falling! We heard that Flagstaff had received eight inches of snow overnight. At least here it melted on contact!
Posted by Brenda_Zanin at 7:10 PM