Snowbirds and other feathered friends

Our second week in the new RV is unfolding nicely. Now that we have stopped site-hopping, we feel a bit more settled, but with an RV that's your only transportation, "settled" is a relative term. Today we set off in it once again, and we are getting our mobilization routine worked out pretty well. There are only a few small things we need to do before we head out, as a result of our discipline regarding putting things away when not in use.

Honeymoon Island beach was stop number one; we never get tired of strolling along the shore of this beautiful spot. This time we headed toward the pet beach, where a number of visitors were letting their dogs romp in the waves and sniff other dogs. Even though I have a basket full of pretty shells at  home, I couldn't resist picking up a couple more.

Next was Camping World. That was a bit further afield, so by the time we got there, we were ready for lunch. No problem; just put 'er in Park and head for the fridge, two feet away! After enjoying a bite to eat, we went in to the store and started browsing. The number of gadgets for RVers and campers is truly amazing, from sporks (an eating utensil that's a fork at one end and a spoon at the other) to foldable rocking chairs and everything in between.

Val was looking for a device to keep our awning from flapping in the breeze. We deployed the awning for the first time yesterday but we couldn't leave it out for long because the wind had picked up. The wide expanse of material is like a sail if a gust catches it, and we had no desire to become airborne, let alone face a nasty repair job if it should rip. Unlike other awnings, this one rolls out with two V-shaped arms under the fabric, rather than straight ribs on either edge. Once extended, you can release telescopic legs to anchor the awning to the ground or to a couple of clips on the RV wall. Unfortunately, the flap preventers we saw at the store weren't designed for our style of awning. So we'll just close it when it's breezy. 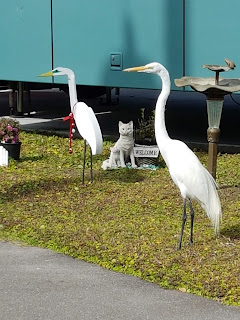 With a couple more errands attended to while we were mobile, we came back to our spot and got settled once again. As we bustled about preparing supper, we could hear the local neighbourhood mockingbird trilling away from a nearby tree. The serenade continued while we ate. I sure wish this bird would fly north and do its thing back home; it's so uplifting to hear this plain-looking creature singing its heart out with every variety of birdsong you could imagine! Meanwhile, other large white birds with red legs and a long, probing beak meandered through the park providing free soil aeration services. And down the way, an egret has been spotted, courting a cute plastic version of himself that someone has planted next to their RV. It looks like true love.
Posted by Brenda_Zanin at 6:56 PM