Off to the duck race

Dunedin, FL -- I wouldn't have thought I'd appreciate a down-filled sleeping bag for Florida nights, but it's been a real boon since we got here. Overnight temperatures have been in the low sixties, and that extra warmth has made all the difference. The days have started off quite cool, and some might feel the highs lately have been disappointing, but not me. Low 70s are my kind of weather, if you throw in some sunshine and breezes. We should be hitting that for the rest of the week at least.

The main activity of the day in the park today was the annual duck race and Tiki party, centred around the swimming pool. Dozens of bobbing yellow plastic ducks are set afloat inside a boom of pool noodles. When the noodles are lifted, a team of swimmers armed with squirt guns tries to nudge the ducks toward a narrow opening near the deep end. On the other side of the opening is an opposing team, similarly armed, whose objective is to keep the ducks out. Great shouts of encouragement fly forth from the excited crowds, who have a stake in which duck gets through first. Each little floater has been numbered and paid for, and the winning duck garners a nice prize for the sponsor! Smart observers park themselves at a certain distance, unless they don't mind being doused with stray squirts from time to time!Of course, the fun is augmented by a tasty barbeque lunch and drinks.

We enjoyed our burgers in a shady spot and watched the first couple of heats, but since we weren't around when they sold the tickets, we didn't have a stake in the results. So we headed out on our borrowed bicycles to try the home-made ice cream at the Causeway Café. One of our friends told us about the place and piqued our interest. 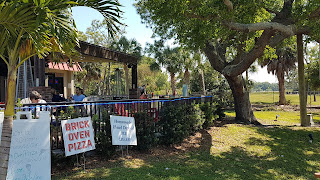 Lots of bikers were out today on the Pinellas Bike Trail. There was every type of two-wheeler imaginable, and every level of biking expertise as well. With ours carefully locked at the bike stand next to the café, we went in to see what we might want to sample.

Ten flavours in the glass case enticed us. Val chose vanilla and strawberry, and I picked one labeled "Heath"; I thought it was "health" with a typo, but it was really a flavour resembling a chocolate bar of that name, with chocolate bits and toffee crunch. Yum. Neither of us could remember the last time we'd had ice cream, but it was worth the wait! We enjoyed our treats, sitting in comfy Adirondack chairs watching the passing throng.