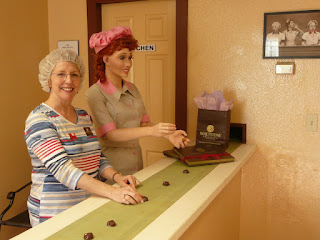 St. Augustine, FL – Our future brightened quite a bit today as Val and I both partook of water from the Fountain of Youth! I had always thought that it, and Juan Ponce de Leon, its discoverer, were mythical entities, but we learned otherwise here. A member of Christopher Columbus’s crew when it came to the West Indies in 1492, Ponce de Leon landed on these shores in 1513.

The Fountain of Youth park we visited this morning includes a prehistoric spring that native legend claimed to be a source of eternal youth. Still flowing today, the fountain continues to enchant visitors who can enjoy its waters in little plastic cups that staff members set out each day. Peacocks roam the grounds, where we also learned about navigation by the stars in the planetarium and native lifestyles at the village of thatched huts which is the park’s newest feature. The land is the site where Pedro Menendez de Aviles, a Spanish admiral, founded St. Augustine in 1565 and claimed the territory for Spain – a territory that comprised the entire North American continent!

With a renewed spring in our step, so to speak, we boarded the red train and headed for the Whetstone Chocolate Factory on the west side of town for our tour. The heady scent of chocolate greeted our nostrils as we entered the shop, and even before the tour began I just had to have a taste of their wares! Fortified by a delicious dark chocolate truffle, I eagerly absorbed the information about cacao plants, the beans within its pods, the drying and roasting process, and the further steps between raw cocoa and the amazing confections that are offered at the other end.

Several tastings enhanced the experience, as we tried bitter cocoa nibs, milk, white and dark chocolate samples, and artisanal chocolate formed by extensive processing to extract the most delicious flavour and texture possible. I even got to pose with a model of Lucille Ball next to the conveyor belt from that unforgettable scene in one of her I Love Lucy TV show episodes! It wasn’t hard to make use of our discount coupons in the shop before we left, knowing the important health benefits of anti-oxidants in 70 per cent dark chocolate. Yum.

The red train brought us back to the harbour where we visited the Castillo de San Marco, the great fort built from coquina, a local construction material made with crushed shells. Dressed in a tri-corn hat, a blue doublet and bright red hose, our guide Jesse told us the tale of the siege at the fort in 1702 when the British attempted to take it. This strategic spot was the site of many changes of power over the centuries, and the site is now a national monument.