Behind the scenes with Walt 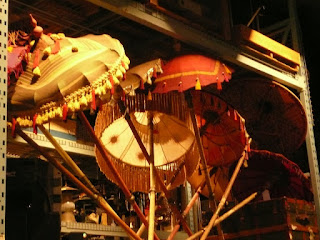 Kissimmee, FL – A soft drizzle, which then escalated into proper rainfall while we ate our breakfast, did not deter us from our third day at Disney World, this time to the Disney Hollywood Studios.

By the time we parked there and headed for the shuttle bus to the park grounds, the rain had dried up and the sun was peeking through the clouds. It remained overcast for the rest of the day, but the only rain we experienced from that point on was manufactured by the movie special effects pavilion that we visited. We couldn’t believe our luck.

We weren’t the only ones to defy the weather; crowds of moms, dads, kiddies, grandparents and others flowed through the gates for a day of fun, but it wasn’t impossible to get through. There were actually park benches and picnic tables available for use if we wanted to sit down.

A lady we met at Epcot yesterday gave us some tips for this visit, having been a regular attendee at WDW for years. So on her advice, we headed first for the stage show of Beauty and the Beast, a 30-minute version of the movie, complete with a talking teapot and Belle the book-reading heroine. We were not disappointed!

On to Mickey Avenue to learn about animation drawing in its pre-computer days, with pictures of the first Mickey Mouse as drawn by a young Walter Disney in 1928. We learned of his fascination with Abraham Lincoln, and his deep affection for his older brother Roy who, in early times of difficulty and poverty, made sure his younger siblings each got a toy for Christmas. We watched a video narrated by Disney himself, whose dream of an amusement park where parents and kids could have fun together began when he took his young daughters to ride the carrousel and watched them from a park bench.

Our last visit was to the Studio Backlot Tour, where we saw some of the mechanics behind torpedoed ships, flash floods, explosions and other special effects. The tour took us through warehouse areas full of props like old bicycles, parasols, suits of armour and rubber face masks, and past large windows through which we could see seamstresses at dozens of sewing machines making costumes. We also strolled through Streets of America, full-sized lots of buildings that were only facades, but looked convincingly like the skyscrapers of New York and the steep avenues of San Fransisco.

It was a treat to peek behind the scenes and appreciate the incredible contributions of huge teams of people who work to put together the movies we all love to see. As the third of three days of visits to Walt Disney World, this was a great finale.