How to survive winter 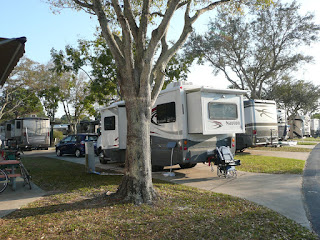 Dunedin, FL – Clear, sunny skies have beamed down on us and even though we’ve been here for several days now, we still find ourselves exclaiming over what beautiful weather we’re enjoying. It’s delightful!

Saturday was laundry day – at least for me; no-one else came near the laundry room the whole time I was there. Not that I was complaining – it was better than the time in Las Vegas when there were more launderers than machines and people started fighting and throwing each other’s clothes around! I couldn’t get out of there fast enough!

Our plan for later in the day was to invite John and Fawn for supper at our place, since it seemed warm enough to eat outside. Having four inside our tiny home on wheels is virtually impossible, so this looked like a good plan. We got extra steaks and veggies, and picked up a nice dessert. We called John from the store to invite them over and he accepted immediately, so we were surprised when, a bit later on as we chatted with them at their place, Fawn invited us to join them for supper – they had steak for the barbeque! Apparently there was a miscommunication. However, by this time the sun was setting and a fresh breeze was making us think that dinner al fresco wouldn’t be as appealing as it had seemed earlier.

No problem; we offered to bring our food over and do it at their place instead. One of the other campers, Willem, pedaled by on his bike and John and Fawn hailed him over to meet some fellow Canadians (us). He was temporarily on his own at the park, so we suggested he join us for supper. After a meal of delicious steaks, salad, potatoes, fresh green beans and tiramisu for dessert, Willem declared he had been on his way to buy a steak for his supper and that tiramisu was his favourite dessert, so we were delighted to have made his day as well as his acquaintance.

Today was girls’ day out as a group of us drove to St. Petersburg, just south of Dunedin, to attend a matinee performance of the musical Nine to Five of Dolly Parton fame. It was presented by an amateur community theatre group, and I was surprised to read on the program that all the music and lyrics had been composed by Dolly Parton.

We enjoyed the story of 1970s life in the typing pool for women who were underpaid and overworked under the thumb of a heartless boss. It was fun to see the 70s clothes and typewriters, and some of the actors had excellent singing voices too.

The lot of us – about 20 women from the park – then descended unannounced on a local Perkins restaurant, where the staff pushed several tables together into one large one in a separate dining room for us, and then juggled 20 different orders, some of which changed more than once before being finalized! We all enjoyed our meal and plenty of laughs as we covered every subject under the sun.

The sun had actually set before we got back, but a big orange moon took its place, rising through the palm fronds above the park and closing the hibiscus flowers for the night. This sure is a great way to pass the final days of January.