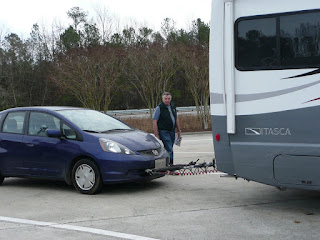 Winchester, VA – We have crossed four states today – New York, Pennsylvania, Maryland and West Virginia – and we’re now in a fifth. The last two were just small wedges of state, but it brought the total to five nevertheless. The foothills of the Appalachian Mountains came into evidence as we continued southward, lending us vistas of rolling hills with small towns nestled in their folds.

The weather was very kind to us again today. On the forecast in the hotel breakfast room this morning, we heard of rising temperatures across this part of the country, and the risk of avalanches which that presented in some areas. My concern was for the thick pad of snow on top of the RV, and what would happen if that were to come loose as we traveled along.

I kept looking up at the skylight above our heads, which was totally encased in snow when we left Ottawa and all day yesterday. This morning, after an hour or so on the road, I could see a couple of patches of blue sky through the white, and water droplets against the glass as the warmer temperatures went to work.

The outside temperature recorded on the dashboard of the RV started at about minus three degrees Celsius, and quietly rose mile after mile. The thick blanket of snow in the underbrush on either side of the Interstate began to thin out, and tufts of grass started showing through in larger and larger patches. We actually saw some plants in the bush with green leaves!

We stopped for lunch at a Pilot truck stop just off the highway, hoping to fuel up at the same time. After skirting huge tractor trailers as we approached the diesel pumps, we discovered they were not designed for a pipsqueak RV like ours with a mere 25-gallon capacity. So we decided to skip the fueling up and just park and eat. We found a spot that faced into the sun, and left the RV like a midget among giants while we went inside.

Back out on the road, we pulled into another filling station across the road to try our luck at their pumps. This time we succeeded. To get onto the ramp for the southbound side of the interstate, we had to do a bit of a U-turn, and as we did so there was a loud whooshing sound as a big load of snow flew off the roof of the RV and splattered on the ground, as well as on our windshield in front of us! Good thing we were off to the side where we could stop and clear away the avalanche in safety! I was so relieved to have that taken care of at last! There was only a small lump at the very back left when we got onto the highway again, and by the time we made our next stop it had completely disappeared.

The mercury got as high as 12 degrees by the end of the day. With any luck, we won’t have to contend with the white stuff again for a long time. The landmark we’ll be looking for now will be the first flowers in bloom! Won’t be long now!