A resilient and gracious city 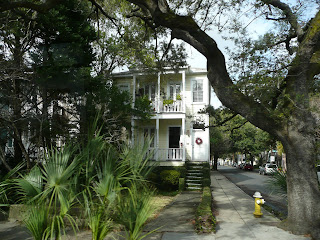 Charleston, SC – After arriving here yesterday through rush hour traffic and on busy streets with industrial and commercial establishments everywhere, we got a different look at Charleston today. The visitor center was our first destination, where we purchased tickets for a three-part tour that included the historic city, one of the restored mansions, and Fort Sumpter. We completed the first two parts this afternoon.

Only one other couple boarded the tour bus with us, so it was almost a private tour. Glen, our driver and guide, told us that he rarely makes use of the air conditioning this early in the year, but he ran it for us today. He says it’s usually a good 20 degrees cooler in January!

It was lovely to see the many gracious homes, cobbled streets and carefully-tended gardens in the historic part of town. Charleston is on a peninsula shaped like a tear drop, with the oldest part at the bottom facing the Atlantic Ocean. Its history dates back to the 1600s, and follows a series of devastations and recoveries over the centuries that included an economic disaster following the Civil War, an earthquake that flattened most of the city, several massive fires and, more recently, Hurricane Hugo in 1989 that destroyed the home of our guide.

We learned that enormous wealth had come to original residents through trade in rice, indigo and cotton. They spent their money on huge mansions with verandahs on several floors to catch the breezes (which they refer to here as “piazzas”), decorated inside with elaborate plaster moldings around the high ceilings, paneled doors, grand spiral staircases and glittering chandeliers.

Despite subsequent downturns in the economy of the region, the city soldiered on and prospered. Burned, flooded or flattened homes were rebuilt and restored. One historic mansion we toured today had barely missed being torn down to make a parking lot, and had housed a gas station on its front lawn for a time, as well as sheltering low-income families in its spacious rooms (a family with eight children lived in the ballroom at one point!) before a wealthy resident of the city paid the back taxes on the property so it could be reclaimed and returned to its original beauty.

On another street that had become quite seedy, a designer bought one home and fixed it up, painting the exterior a trendy pink. Over the years, more residents followed suit, choosing other bright colours for their homes on a stretch that is now a tourist magnet known as Rainbow Row.

The city’s maritime history is a whole other chapter which we only glimpsed today. We stood on the Battery, a sea wall that faced the barrier islands and, beyond them, the ocean, and were surprised by a dolphin that surfaced several times in the water just off the shore. Glen said he’d arranged it just for us. Charleston has the USS Yorktown aircraft carrier that was used to recover a number of space capsules when they splashed down from outer space, and is now a permanent museum. There is also an authentic paddle-wheel steamboat that visitors can ride on. There’s more to see than we’ll ever cover in our short visit! Guess we’ll have to come back.