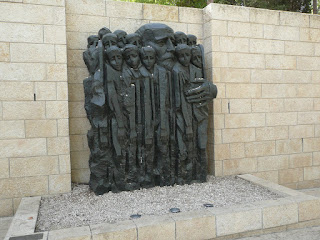 Jerusalem – Moments ago, when we were leaving our last stop on the day’s itinerary and lining up for the bus, howling sirens echoed over our heads. Back at our hotel room, we saw on the BBC TV report that a rocket had landed near Jerusalem. The target, the TV says, was the Israeli Knesset, the seat of the country’s government – which happens to be close to the neighbourhood of our guide, Gila. It is not close to our hotel, but we are rattled.

This morning as we were setting out, Rafik, our driver, had to change his route because the street he was headed for had a police roadblock. Fortunately, despite all these unusual events, we are still able to follow the Craig Tour activities in safety and comfort.

We went into the Old City to start the day, visiting the Upper Room where the Last Supper took place. History suggests this was also the place where tongues of fire appeared over the heads of the assembled group on the day of Pentecost, after Christ’s resurrection. It became a Crusader church and a Muslim place of worship in different eras, so there are Corinthean columns and ceramic plaques and windows with words from the Koran – a true jumble of cultures.

Our next stop was the tomb of David. The tomb, a large stone box with a peaked cover, draped in purple cloth embroidered with a harp and Hebrew inscriptions, is housed in a very small synagogue. It has not been authenticated, and I would have thought it might have a grander home. As it was, the women were on one side of a black curtain, seeing half the tomb, and the men were on the other seeing the other half. The room was no bigger than a spacious living room. Cardboard yamulkas were in a basket at the door so the men could cover their heads.

Still in the Old City, we stopped at a place called the Burnt House, where an excellent multi-media presentation told the story of the family that lived in the house when Jerusalem was sacked and burned by the Romans in 70 AD. We sat in front of the excavated ruins of the house, where clay water jars and other pottery was found, as well as evidence of charred wood and a Roman spear.

Three overlapping movie screens presented the drama with actors portraying the Jewish priest, his wife and children and their housemaid and how they reacted to the Roman occupation. It really helped us imagine how it might have been.

There was a holiday feeling as we walked through the Old City streets in the Jewish Quarter, since the Sabbath begins at sundown on Fridays and many Jewish families take the day off. We saw a number of Orthodox Jewish families walking by, the men dressed in black and the little ones scampering about under their mothers’ watchful eyes.

We boarded the bus outside the Jaffa Gate and headed for Yad Vashem, the Holocaust memorial museum in the western suburbs of modern Jerusalem. It’s an amazing site where one could spend several hours, but we didn’t stay that long. The long building has a zigzag path through it, bringing visitors to different rooms.

The displays are an excellent blend of factual historical artifacts and texts, and chilling human stories of Holocaust victims, depicted in videos of people telling their personal experiences, as well as poignant displays of personal items like a child’s doll, a pile of ragged shoes, or yellow six-point stars from people’s coats. We gathered at our rendez-vous point in the courtyard afterward, but no one was inclined to chat. We had many things to ponder in our own hearts.

After lunch at a kibbutz hotel, we made our last stop at the Garden Tomb. This place was established in the 1880s by a British general, Charles Gordon, whose Jerusalem home overlooked a stone hillside with skull-like features in the rock. It was outside the Damascus Gate, near a garden that had clearly belonged to a rich man, and it had a large burial room cut into the rock with a trough where a round stone could roll in front to seal it. He bought the land and established it as a place for visitors who wanted to remember the place of Christ’s crucifixion and burial as it might have been.

Heather, our tour leader, conducted a short communion service for us in the garden, serving the grape juice in tiny olive wood cups that we were allowed to keep afterward as a gift.

The sirens that wailed at us on our departure broke the spell somewhat, although most of us weren’t exactly sure what they signified. Some of us wondered if it was a normal thing at sundown on Friday to tell the faithful that the Sabbath had officially begun. The TV news back at the hotel told us otherwise.

Our itinerary for tomorrow is a trip to the Dead Sea, Masada and Qumran, all away from the city, so that will be a good thing.
Posted by Brenda_Zanin at 10:42 AM

prayers are with your from st mark's

We, at home, are watching events carefully. Those at the Craig Travel office do not seem concerned in the least which encourages us to think that all will go smoothly for a safe departure on Monday. Thank you for you excellent descriptions of your days.
Denham - Joanne Dingle's husband