Castle in the clouds 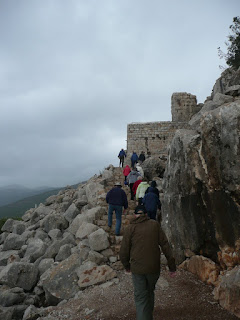 Jordan Valley, Israel – Our observance of Remembrance Day took place at 6:45 this morning, before breakfast. Judy, one of the group members, brought poppies for each one of us, plus Canada flag pins, which were passed around after our moment of silence. Judy lost her son in Afghanistan and this was her first Remembrance Day since then, so it was particularly moving for those of us who knew her story.

We only drove for five minutes out of the kibbutz before turning off the road to visit the “Baptismal Site on the River Jordan”, just near the point where the river flows out of the Sea of Galilee. Gila, our guide, explained that scripture tells us Jesus was baptised in the Jordan River when he was in Judea, and this spot is in Galilee, so it isn’t the actual place where it happened.

Nevertheless, a large visitor centre, gift shop and access points to the river are all located here and it has become a major drawing point for all faiths. Pilgrims in white shifts crowded at the steps leading down, waiting their turn to be immersed in the water. I bought a small plastic bottle and scooped up some of the water to bring home.

The on-again, off-again rain continued today as we headed north along the west side of the Sea of Galilee toward Israel’s common borders with Lebanon, Syria and Jordan. We turned off to visit the ruin of the pagan temple to Pan, next to the river Dan, one of the sources of the Jordan River. A large cave provided a natural backdrop for the temple, and we could see decorated niches carved into the stone cliff where statues would have stood.

The town of Caesarea-Philippi is located here, and this is the spot where Jesus asked his disciples “who do you say that I am?”. When Peter replied that he was the Messiah, Jesus declared that “on this rock I will build my church, and the powers of death shall not prevail against it”. Nor would the powers of pagan gods, whose temples were so close by.

The highway zigged and zagged upward as we approached the fortress of Nimrod. We could see the massive structure above us, with a commanding view of the entire valley below it. Wind and rain whipped our hair and jackets as we headed in to explore this Muslim fortress, built on the pattern of the many Crusader castles in this part of the world. Huge blocks of carved stone formed its walls and archways, and steep staircases led down to spooky dark places below. At the top we could look across in two different directions to see high points where other castles had once stood, within sight of each other, to keep a constant eye on any approaching enemies.

Nimrod was a hunter and he is mentioned in the Old Testament. Gila told us that he became puffed up with pride until a fly went up his nose and began to eat away at his brain. He asked that his head be cut off and thrown into the valley, and legend says this is why that valley became infested with flies.

The bus was a warm haven from the buffeting winds as we headed further along the road (which leads eventually to Damascus, we were told) for our lunch break. A Druze family ran the restaurant where we stopped. Val and I had labneh (goat yogurt) spread on a large round Druze flatbread, with a dish of fresh olives. I was glad the bread was warm.

By this time we were at the northernmost part of Israel, within sight of Lebanon and Syria. If the clouds had not been so low, we might have seen the snow-capped peak of Mount Hermon that straddles the border of Israel and Lebanon. We did make a stop a bit later when the ceiling had lifted a bit, and Gila pointed out, way off on the horizon, the outskirts of Damascus, temporarily made visible by the sun breaking through.

We could also see abandoned bunkers and barracks that had sheltered the Syrians during the Six Day War of 1967. Nearby was a UN observation settlement, and we passed an Israeli military base on our trek today as well. Gila had called ahead before we left Netanya to make sure it would be safe enough for us to venture this close to the northern borders, and fortunately it was. But it was clearly a place where tensions have long existed. Red triangle warning signs still dot the hillsides where Syrian land mines remain scattered.

The bus brought us southward again, this time along the Golan Heights on the east side of the Sea of Galilee. Our last stop of the day was at Kursi, the site of an ancient monastery and chapel. Delicate mosaic floors in beautiful patterns decorate the chapel area. While tour guides are not allowed to splash water on them to bring up the bright colours of the tiles, they were washed for us by the rain instead, and we could see delicate flowers and leaves. Invading Muslim fanatics had obliterated the animals and birds in the designs, as such depictions were against their laws, but they missed one or two lovely birds that we were able to enjoy.

The chapel was near Gerasene, which is the place where Jesus commanded the demons to come out of Legion, a tortured man, and enter into a herd of swine. The herd raced down a steep embankment and were drowned in the sea. They have located an area near the Sea of Galilee where there are steep banks, so they are confident that this is the right place. Jim, a member of our group, read that story to us as we stood among the chapel ruins.

We completed the circle around the Sea of Galilee, passing acres of banana plantations on the way. We had also seen avocado and mango trees, date palms, grapefruit and olive trees, grape vines, and peach and apple groves by the road today. And, having also seen cows and beehives, we knew we were in the land of milk and honey.
Posted by Brenda_Zanin at 7:37 AM