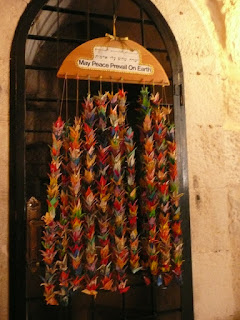 Jerusalem – For the first time since our arrival, we had no wake-up call and no rendez-vous with the bus this morning. We were on our own! And wouldn’t you know, I woke up wide-eyed at 6:05 am anyway.

We had a leisurely breakfast in the dining room and then met up with the Anglicans of the group to walk over to St. George’s Cathedral, just across the way from the hotel. An Arabic service was wrapping up as we arrived in the courtyard, so we waited a few minutes before going in to take a seat.

As we looked about and settled ourselves, the rector came down the aisle looking for a woman to read one of the lessons, so I volunteered. It was an honour to participate in this way, but I wished they had provided a step-stool when I got up to the lectern; I doubt anyone could see my face! However, there was a mike that seemed to pick up my voice all right, which was a good thing because it was the reading from Hebrews that went on at some length. Fortunately, I had been given the sheet of paper ahead of time so I could hold it at my eye level instead of straining to read it from a book that would have been placed too high.

Having seen, in so many places around Jerusalem and beyond, ruins of historic sites, not to mention the ominous news reports of new hostilities, the Gospel reading resonated greatly, when Jesus said not one stone would remain on another, and that there would be wars and rumours of wars in the time of tribulation. Then again, almost everything in the service resonated, as we worshiped in the Holy City of Jerusalem and sang of places we’d only just visited in previous days.

After the service, we went back to change and caught the free hotel shuttle bus to the Jaffa Gate. Sunday is a regular business day in Jerusalem, so everything was bustling as normal in the Old City. At the Jaffa Gate is the Tower of King David Museum, which we decided to tour with another couple from our group. It also had a small café, so we had a bite of lunch before having a look around.

In imaginative and entertaining ways, the museum designers brought us through the continuum of time from the city’s earliest days to the present. It was amazing to see how many iterations the city and its sacred places had had over the centuries. The Babylonians, the Greeks, the Romans, the Byzantine Christians, the Muslims, the Crusaders, the Muslims again, the Europeans and the British and now the citizens of Israel – all had claimed the city as their own and established themselves for periods of time – and how many of those periods saw one stone thrown down from another and then rebuilt?

One of the comments about the current hostilities that we heard was that it took a lot of nerve, last week, to send a rocket in the direction of Jerusalem (it landed harmlessly outside the city). As a holy shrine for the world’s three major faiths, no one would believe that any group in this part of the world would dare to attack it, lest they desecrate their own sacred places.

We can hope this remains the case, but history tells us otherwise. Hence the ongoing refrain, “pray for the peace of Jerusalem”. Amen.

Tonight is our closing banquet, and then we will be packing our bags and heading home. It’s been a fabulous visit, and undoubtedly we have some adventures ahead of us as we head for the airport in the morning. We know we will never forget all the places we’ve seen and friends we’ve made. Stay tuned for the final chapter!
Posted by Brenda_Zanin at 8:12 AM

Brenda, I continue throughout the years to pray for the peace of Jerusalem.