The gate of humility 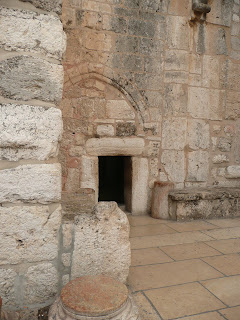 Jerusalem – An early start was required today to avoid a long lineup at the restricted entry near the Jewish holy site of the Western Wall. Gila reminded us to bring our passports, to leave any pocket knives we might have behind, and if we were bringing Bibles with us, to leave them on the bus. All these precautions were to make the security check go as smoothly as possible.

The Western, or Wailing, Wall is the portion of the wall of the ancient Temple that was accessible to the Jews after the destruction of Jerusalem by the Romans in 70 AD and the subsequent pagan city that was built there. It was built by Herod and has become one of the holiest shrines of Judaism.

The checkpoint we went through brought us to an enclosed ramp that leads up to the huge plaza around the Dome of the Rock. As we ascended the ramp, we could look down on the many pilgrims praying at the wall.

After a visit in the plaza and a close-up look at the magnificent mosque, tiled in blue designs and ringed at the top on its eight sides with the elaborate script of the Koran and topped with its pure gold dome, we came down by another route back to the Western Wall.

Men were directed to the left and women to the right – and we had no sense of exclusion as we joined the women, some Jewish and others from other faiths and countries, in our approach to the wall. Every little chink in the ancient stones was stuffed with tiny bits of paper, on which people had written special prayer requests. We could hear weeping and see people pressing their foreheads against the stones.

On the other side of the screen, the men were dressed in black with long prayer shawls, some wearing tall black hats and long curled forelocks. They recited from small prayer books in their hands, and some rocked back and forth as they put hearts, minds and bodies into the fervor of their devotions. It was an amazing sight.

Our next visit was to the Shrine of the Book, a modern museum dedicated to the Dead Sea Scrolls that were discovered in a cave by two Bedouin shepherds in 1947. In the courtyard of the building is a fascinating 1:50 scale model of the ancient city of Jerusalem from the time of Christ. It was easier to see the relationship between the court of Pontius Pilate, the Via Dolorosa and the crucifixion hill with everything laid out in an area the size of a couple of parking spaces.

Inside we learned about the discovery and examination of the scrolls, and we saw the clay jars in which they were found, plus some actual sections of the scrolls themselves. The roof of the shrine resembles the shape of the clay lids on the scroll jars.

Our bus set out for Bethlehem, dropping our guide Gila off near her apartment before we left the city. She does not have access to Bethlehem as an Israeli citizen, so they had arranged for a Palestinian guide to show us this part of our itinerary.

As we drove toward Bethlehem, Heather, our Craig Tour leader, led us all in renditions of “O Little Town of Bethlehem”, “Once in Royal David’s City” and other carols, which all took on new meaning! We even caught sight of a shepherd leading a flock of sheep and goats on the hillside as we approached the town.

We were glad when Aschraf, our new guide, brought us first to a restaurant for lunch before we headed for the Church of the Nativity. Sightseeing is hungry work, and we tucked into our falafel and shawarma sandwiches with a good appetite.

Great rounds of applause rang out as Rafik, our driver, navigated our large bus through Bethlehem’s narrow streets, made more challenging by parked cars, other buses, and pedestrians.

The Church of the Nativity has a very plain façade of cut stones, with no ornamentation or even a sign out front. At the bottom of its high outer wall, tucked in a corner, is a low stone door no higher than a person’s shoulder, and no wider than one person. So, no matter how important you might be, or how numerous your group is, you must go in one by one, and you must stoop down to get inside. It wasn’t always like this, but when Muslim invaders barged in on camel or horseback, desecrating the holy place, a deterrent was required, so this low door has been the only entrance ever since the 16th century.

The spacious sanctuary inside is devoid of pews, and the altar is adorned with magnificent chandeliers and censers, suspended from the high ceiling, and behind it are icons faced with gold and silver. Greek Orthodox, Armenian and Roman Catholic churches share the building.

We bunched closely together near the doorway to the grotto beneath the main church floor, waiting our turn to file in. It was a lengthy wait, because of the crush of pilgrims and also because our progress was halted while a group of Catholics and then Armenians commandeered the holy space to conduct short services. We jostled one another as we descended the steps and filed one by one through another narrow door to the space below.

On the floor under an altar on the right was a large 14-pointed silver star with an opening, about six inches across, revealing the traditional spot of Christ’s birth. On the other side, under a second altar, is the stone manger in which the Christ child was laid. It was strange for me to be back at this same place, 45 years after seeing it for the first time. I wondered how many thousands of people had filed past it in the intervening years!

We had a brief look at the Church of St Catharine, which stands by the courtyard outside the Nativity Church, and had the pleasure at the back of the sanctuary to listen in on a Eucharistic service being given in English. Then it was time to board the bus again and head out for some shopping.

We were taken to a large store full of local handiwork – beautiful olive wood figures, pottery, and malachite jewelry, all produced by Palestinian families in the area. The owner of the store spoke to all of us before we began to browse, showing us the types of products he had on sale and explaining how much our patronage meant to them. He told us how difficult it had been when unrest in the area kept the tourists away for years at a stretch and asked us very earnestly to pray for peace in this troubled land.

We had no idea how relevant his request was until, just a few minutes later, we learned from one of his sales staff, that another clash had taken place this very afternoon between Israel and the Palestinians in Gaza. When we checked the map back at the hotel, we saw that Gaza is a mere 30 to 40 miles from Bethlehem and Jerusalem.
Posted by Brenda_Zanin at 11:28 AM

Looks like you are experiencing a very unique trip that you will think about for a long time. Good for you. Can't wait to hear more and see the pictures.