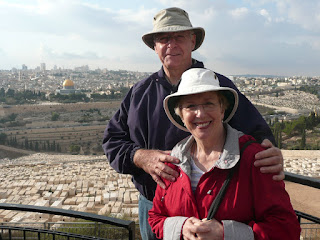 Jerusalem – We are in the Holy City at last. Our introduction was perfect – a panoramic view from the Mount of Olives with the stunning Dome of the Rock and the crenelated walls of the Old City shining in the afternoon sun. More on that later!

With one last farewell to the Sea of Galilee this morning, we headed southward toward Jerusalem, following the Jordan River on our left. The scenery alternated between lush plantations of bananas, olives and fruit trees, as well as fields of peppers and eggplants, and vast, desolate hills of sandy soil and rocks with stunted scrub bushes here and there, as vacant of life as the moon.

The Jordan River was not visible, but we could tell where it was by the vegetation that grew near it. Behind it to the east were the Golan Heights, and, as we continued southward, the hills of Gilead in Jordan.

Our first stop was Beit She’an, where a wonderfully preserved Roman-Byzantine city is laid out to explore. By the time we reached this spot, we had entered into an area under Palestinian authority, and had passed checkpoints and lots of compounds surrounded by high fences and barbed wire. This was the West Bank, a territory of great contention in recent years. All the highway signs were in Arabic and English, with no sign of Hebrew anywhere. However, we were not impeded in any way on our journey.

We sat on the cool stones of a magnificent theatre that could seat thousands while Gila explained about the site, which was only starting to be uncovered in her earlier days as a guide. A wide avenue lined on either side with columns was flanked by the ruins of small shops, and we explored the Roman baths and imagined what the temple might have looked like. At the north end of the site was a tel, or mound, and we could see that there were more ruins up top, but only two of us, me and Kristy, decided to use the free time we were allowed to climb up. The ruins up there were nothing to get excited about, but we got a magnificent view of the ancient city below us – and burned a few calories while doing so, especially on the way up!

On to Jericho next, where Joshua fit the famous battle when the walls came a-tumblin’ down, as the old spiritual goes. Gila had us sing it when we got there to refresh our memories, and then to make sure we had it right, she pulled out the Bible and read the story. She told us about Rahab the harlot, who hid two of Joshua’s spies in her home when they came to scope out the city. For her bravery, she and her family were spared when the city was eventually taken by Joshua’s armies.

Jericho is the world’s oldest continuously-inhabited city, and we saw a tower among the ruins that dated back to 7800 BC! We stopped for lunch at a truck stop outside of Jericho, where one attraction was a pair of camels that were available for rides. They joked that you had to pay two dollars to get on, and five dollars to get off if you wanted to give it a try!

As we continued toward Jerusalem, we could see the hills of Moab and a misty Mount Nemo, where Moses finally saw the Promised Land before he died. When we turned westward toward the city, we could still see a lot of desert by the roadsides.

Gila told us to look out for Bedouins, who inhabit some of these areas. I had remembered seeing them back in my teens, camped in wilderness areas under low black tents, with their goat herds and kids scampering about. A much sorrier sight met my eyes this time, because they have become tied down to the government-funded water supply, so their once portable tents have given way to more permanent shacks made of scrap wood or corrugated metal, and they no longer roam freely.

The elevation from Jericho to Jerusalem rises 800 meters, so the bus was carrying us uphill most of the way. On the horizon we could see some of the buildings and towers of the Holy City, and then the apartment buildings of the suburbs came into view. We then drove through a long tunnel under the Mount of Olives, and when we emerged we could see the whole city spread out below us, with the magnificent Dome of the Rock shining in the afternoon sun!

We stopped at a lookout point on the Mount for a brief orientation as we gazed over the city. Just below us we could see a huge Jewish cemetery where each grave is covered with a stone box, with inscriptions and a niche where candles are burned on the anniversary of the person’s death. Small stones are left on top by loved ones to mark their visit.

Across the way we could see the great walls of the city, the golden Dome of the Rock and beyond it, the darker domes of the Church of the Holy Sepulcher. Dozens of minarets towered above the Muslim quarter, and we could hear the wailing call to prayer wafting across the valley.

We stopped at the peaceful walled Pater Noster convent, where large ceramic plaques are displayed on its many walls showing the Lord’s Prayer in more than 100 languages. Gila asked us what languages we knew in our group, and we found the French, German, Italian and English plaques. Val did a great job reading out the Italian prayer! It was such a lovely way for all of us to appreciate both the varied heritage of our group, and the amazing number of languages (some of which I’ve never heard of) whose speakers recite these special words around the world.

Before we left the Mount, we visited the traditional site of Christ’s ascension, marked by a footprint in the rock. This rock is under a domed building with a hexagonal courtyard around it that has been both a mosque and a church in different eras. It was not easy to make out a footprint, but we all snapped pictures of the spot anyway!

In another feat of expert driving in tight traffic, our intrepid driver Rafik brought us safely to the Grand Court Jerusalem Hotel on St. George Street in Jerusalem. Once again we felt spoiled as our Craig Tour leaders figured out registration, room assignments and baggage delivery while we simply put up our tired feet and pondered the adventures of another special day.
Posted by Brenda_Zanin at 10:48 AM

When one journeys in Israel, one truly understands the words "they went up to Jerusalem". It is a wonderful experience!