Of muskets and quill pens

Williamsburg, VA -- Today we hit the two other points on the so-called Historic Triangle around Williamsburg -- Jamestown and Yorktown. It was a busy day for teachers in the area; in both venues, armies of wiggling, squirming, excited school kids trooped through displays and interpretive stations, learning about life in colonial times and, hopefully, about how their country became a country back in the 1700s.

A beautiful parkway links all three points in the triangle, and we started down the part leading to Jamestown first. It's here that three ships, the Susan Constance, the Godspeed and the Discovery, landed after making the Atlantic crossing from England. Replicas of all three ships are moored on the James River next to the historic property, and visitors could climb aboard and marvel at the coffin-sized bunks and cramped quarters that passengers had to endure for months to get here. 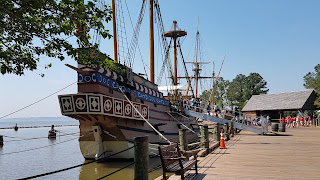 Gracious buildings with large exhibition halls provided an informative introduction to the site, with artifacts, dioramas, artwork and text explaining the early encounters between settlers and native peoples. Several short films also depicted the events, and costumed staff members outside were on hand to answer questions and explain what life was like in those early times for both the colonists and the aboriginal communities in the area.

The weather was a bit kinder today, so we weren't quite sweltering after trekking about. After our morning at Jamestown, we ate lunch in our RV in the parking lot before setting out on the Colonial Parkway for Yorktown. It was about a half-hour drive, but on a gently winding road through tall shade trees, under red-brick bridges and past nearby waterways. One would never know we were traveling through some fairly densely populated areas for the entire way. Had we known how scenic it was, we would have pulled over on one of the lay-bys for our lunch instead of the parking lot!

The American Revolution Museum at Yorktown was another beautiful facility, set back from the edge of the York River and landscaped with lovely flowerbeds and a display of state flags. High-ceilinged halls housed exhibits and artifacts that explained in great and varied detail how the beleaguered Virginians came to the point of severing relations with the British and forging a new world of independence and freedom. We kind of felt like we were interlopers in a family conversation as we listened to videos and read texts describing this country's personal history.

One short film presentation was projected onto a 180-degree screen and included vibrations under our seats, flashing lights and even smoke as we watched battle scenes that were happening all around us! The section I really enjoyed was a gallery of portraits of ordinary people with quotes from their personal journals about the happenings throughout the war years. 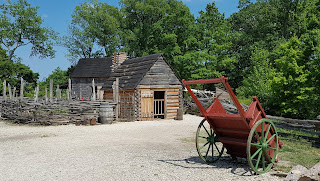 Outside we wandered through a military camp where a costumed gentleman showed us the contents of a typical soldier's backpack, from his straight razor to a tin box with flint and linen fibres that helped him start a fire. Combs were made from cattle hooves, and there were even iron picks he could strap onto his boots to allow him to march on icy surfaces without slipping. In the colonel's tent there was a small wooden desk with quill pen and inkwell where he could record his strategies. We jumped when a soldier fired his musket with a loud 'crack' down the way for a crowd of school kids.

It was back to reality when we headed out to gas up the RV and pick up some groceries. I imagine the designers of these excellent historic sites hoped visitors might leave with a better appreciation for the day-to-day freedoms we all enjoy these three hundred years later.