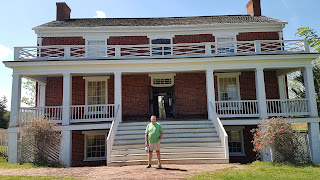 Appomattox, VA -- This is the place where Ulysses S. Grant and Robert E. Lee  came together to negotiate the terms of surrender and bring the Civil War to an end on April 9, 1865. Today Val and I stood in the parlour where these documents were prepared, and walked along the roadways where Union and Confederate troops marched.

Appomattox National Historical Park has recreated the small village of Appomattox Courthouse, with reproductions and original buildings arranged as they were at the time. The home of Wilmer McLean, whose parlour was used for the historic meeting mentioned above, had been dismantled years ago with the intention of moving it to Washington, DC for display. When the plan fell through, the house was reconstructed on its original foundation, and the rooms furnished as they had been.

In addition to the McLean house, there's a general store, the courthouse that gave the town its name, a law office, a jailhouse, slave quarters, a tavern and other smaller buildings.They're laid out in a grassy area with stately trees and gravel roads.

In the courthouse, which is now the park's visitor centre, we watched a short film about this pivotal event in US history. We also read about soldiers, mothers, slaves and others whose memories of the final days of the war were preserved from letters and diaries and displayed for us to read. The heartbreaking human toll of this war felt so real as I read the scrawled misspelled words of a worried father hoping to see his son again. Another soldier who took a bullet in his back that came out through his chest had scribbled a farewell note to his mother as he lay dying -- but in the end, he survived.

Outside, a fresh warm breeze ruffled the grassy fields under a bright sky, and a group of school kids chattered excitedly as they headed to the gift shop. A little further down the road, we stopped at a cemetery where the remains of 18 Confederate soldiers and one federal soldier are buried, some of the last to be killed in the Civil War. 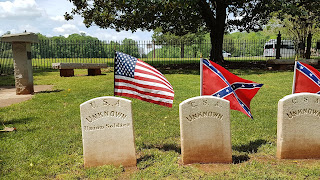 Even closer to town, we stopped at the American Civil War Museum, which provided the perspective of the Confederate states, including memories from slaves who joined the North in order to obtain their freedom, and many artifacts donated by descendants of soldiers. We saw a Confederate flag with some of the stars cut out, removed by souvenir hunting soldiers as they headed home. There was also a scrap of the white flag that a Confederate soldier carried to the McLean house when the surrender talks began.

Everything we saw today was so well done. None of the texts were preachy or defensive, but simply presented the facts. Great care was taken to provide information from every side, both military and civilian, with photographs, paintings and artifacts, and to correct any misrepresentations that may have circulated at the war's end. For example, a painting of the signing of the surrender documents included General Custer, but the caption noted that in fact he had not been in the room at the time. Another text recounted General Grant's generosity, when he allowed food that had been shipped in for his soldiers to be distributed to the defeated and nearly starving Confederate troops.

No one could walk away from a day like this without pondering the high price paid for the peaceful democracy so many take for granted now.

Our campground tonight is in a field right next to the highway, with trucks, motorcycles and emergency vehicles roaring past. It will be a night to unearth the earplugs, methinks. At least we will not have far to go in the morning when we hit the road once again!