Mexico, NY -- Nearly every site in this family-themed RV park is empty. That's because Yogi Bear's Jellystone Park Camp Resort just opened for the season five days ago, so when we rolled in, we had the choice of practically any site we wanted. Many of them, including the most picturesque ones down by the Little Salmon River that's flowing swiftly past, will be very attractive in a few weeks. Right now, however, there is a lot of mud around, so we're parked up on the hill where it's a bit drier. 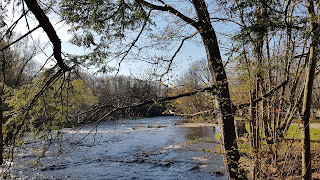 Dry was a happy thing when we woke up this morning back at Jonestown, after a day of constant rain. And although there were a lot of clouds overhead as we headed north once more on the I-81, as the day progressed the skies cleared and it turned out to be a lovely day.

Our route was quite straightforward -- I-81 North till the turnoff for our campsite -- but the conditions varied greatly through the day. Since it's one of the country's most heavily-traveled roadways, it gets pretty worn down over time, so one is either traveling on some pretty rough surfaces, or crawling through a construction zone, or (yay!) zooming along some freshly-paved ribbons of smooth, beautiful asphalt -- within the speed limit, of course. 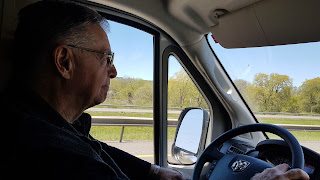 The other thing about traveling north over many miles at this time of year is watching spring at several stages of its appearance in reverse order, from fully-bloomed to just emerging. In Virginia, at Monticello, the tulips had come up, had their moment in the sun, and had already faded when we visited two days ago. The trees along the highway were in full leaf, and people's flowerbeds were set for the season. As we proceeded into Pennsylvania, the trees were well on their way but not fully leafed yet, and today, having crossed into New York state, we saw many trees that were still bare, and lots shaded in that lovely pale green that's only present for a week or so. We also saw dogwood, cherry and apple trees, as well as forsythia, lending splashes of pink, white and yellow to the roadsides. It's almost like traveling back in time! We are confident that tomorrow, when we roll in to our neighbourhood, there will not be any snow whatsoever! We don't want to go that far back!

Val's big decision, on this our last camping day till some time later this summer, is whether or not to winterize the RV. Is there a risk of frost in the coming weeks that could damage some of the more delicate parts of our plumbing system? Or can we dispense with this step since we are already into May, after all. We've winterized our previous RVs many times, so it won't be a difficult task, but it will be different with this new vehicle. We have already purchased the three large bottles of pink antifreeze, and squeezed them into the back storage area. And the long-accepted cut-off date after which all likelihood of frost is past in Ottawa is May 24. Of course, that was before the climate began to change, so who can say for sure any more? Anyway, whether we do it or not, it shouldn't present much of a delay in our departure tomorrow morning. We await the final word with bated breath.
Posted by Brenda_Zanin at 4:36 PM