Myrtle Beach, SC -- According to the KOA literature about this campground, we are in the middle of the city of Myrtle Beach, but looking out our door, we seem to be in the middle of a pine forest. All around us are tall, straight pine trees, and the wind sounds like a huge sigh as it blows through the needles. Every now and then there's a 'bonk' when a small pine cone hits our roof. The ground is carpeted with pine needles and live oak leaves.

It may sound peaceful enough, but in addition to that gentle breeze is a lot of noise! Across the way is a huge jumping pillow for the kids, and all through supper we could hear them screaming with delight. There are several motorcyclists in the park who seem to be making repeated circuits of the roads with their roaring engines. And, despite Mother Nature's free sweep of wind, a park employee has been slowly strolling the grounds with a blower droning away. It's a study in contrasts.

Our day had a leisurely start, since we only had a two-hour trip to make and checkout time was noon. So we took a few minutes to explore the Mount Pleasant campground before we left. It has a lovely artificial lake stocked with fish and, according to a staff member we spoke to, an alligator or two and an otter. He says there used to be three otters but doesn't know what happened to the other two. Hmm. 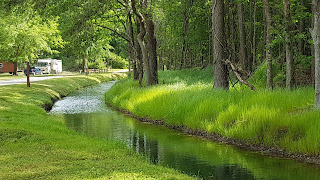 Great puffy clouds were gathering overhead with that anvil grey underside that promises rain, so we dumped our tanks and set out at about 10:30. Our route was quite straightforward -- Highway 17 all the way. The clouds never did open up, so we missed out on a free car wash.

Although our route paralleled the Atlantic coastline, we saw very little of the ocean. Most of the way was a straight four-lane with tall deciduous trees on either side. By noon, however, we reached Georgetown and crossed the bridge over the Waccamaw River and Winyah Bay. Down below were several marinas with pleasure boats galore, plus more utilitarian vessels. A huge factory on the left side of the bridge was busy turning logs from all those forests into paper. 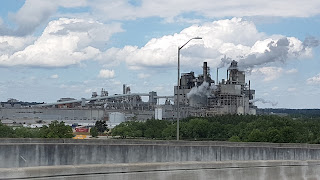 Once we got into town we saw several signs guiding visitors to the historic downtown and harbour. The sign that caught our eye was "Gullah Museum" -- we'd heard of the Gullah people from our friends Scott and Mary Jane. They were among the African slaves that were brought to tend the plantations in this area but developed a distinct culture. It took some hunting to find the tiny museum, and when we walked in we were greeted by Andrew Rodriguez, a softspoken elderly black gentleman who was the proprietor and interpreter for the one-room display area. African artifacts and story quilts sewn by his late wife decorated the walls, with displays about rice and indigo crops. He showed us the quilt that his wife had made depicting the ancestry of former First Lady Michelle Obama, a descendant of the Gullah people. He talked about how the white plantation owners sought out Gullah slaves to tap in to their knowledge of rice cultivation that they brought from Africa. Mr. Rodriguez was more than willing to continue with a lengthy, scholarly lecture on every detail of the history, except we had to cut it short and get on our way. We were glad to know more about this aspect of American history.

After a quick bite of lunch, we continued along Highway 17 through Garden City and Surfside Beach. A series of strip malls, mini-golf courses and souvenir shops reminded us of the type of businesses you find around Niagara Falls. There was one store selling beachwear with a huge shark in front, and the shark's mouth was the store entrance! A Jurassic mini-golf had giant dinosaurs and waterfalls of blue-dyed water. And I'm sure I saw a Ripley's Believe it or Not museum somewhere in there.

We'll spend two nights here so that we can explore Myrtle Beach in more detail tomorrow. Stay tuned!
Posted by Brenda_Zanin at 5:22 PM