Carolina on my mind

Williamston, NC -- There was a Sunday feel about today, as we headed north from Myrtle Beach on Highway 17. We passed more souvenir shops and dinosaur mini-golfs, but also quite a few pancake houses with lots of cars in the parking lots, and customers coming or going dressed in their Sunday best, having fed their souls and now enjoying a feed of another kind with friends and family. 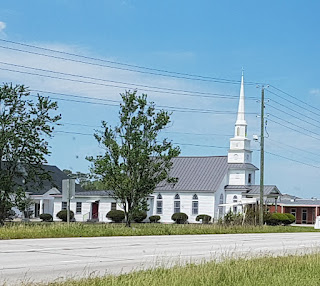 There are plenty of churches in this part of the world, and many have huge parking lots which, of course, were full of cars today. I saw many a Baptist church, and some Lutheran ones, as well as AME churches (African Methodist Episcopal). A lot of them are low-profile buildings with soaring white spires topped with a cross that dominates the landscape of a small town in a peaceful way.

Although our route was nicknamed the Ocean Highway, and the tiny bird's-eye-view map on our RV's navigation screen indicated quite a bit of blue water along its eastern edge, we didn't actually see a lot of ocean. There were long stretches of straight road with green forest on either side. Traffic was light and the weather was fine, so that was helpful.

We had a couple of larger cities to find our way through as we remained faithful to Highway 17 from start to finish. We didn't really need to consult the GPS lady till later in the day, content to follow the route the old fashioned way on a paper map. There was only a short stretch in South Carolina before the state line. Our road atlas was fine in a pinch, but we like to have a recent edition of each state's official map to make sure our information is up to date and accurate, and we didn't have one for North Carolina.

So, when we crossed into North Carolina we kept our eyes peeled for a Visitor Center where we could get said map, and sure enough, the turn-off appeared within a mile or two. Remember what I said about a Sunday feel? Right....the office at the rest area was closed. There was only one other car in the parking lot. At least we could access the restrooms. Fortunately Val found a literature rack near the men's facility that had the official NC map, so all was well.

Wilmington was the first large centre, and the first bridge we crossed took us over Cape Fear River. I caught a glimpse of the port area, but was soon engrossed in keeping an eye on the 17 North highway signs through the city streets. Next was Jacksonville NC, where there's a large military base. We stopped for lunch near a grocery store where we stocked up before setting out again. 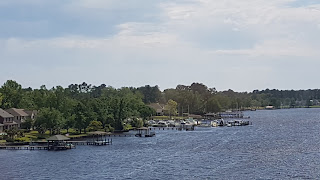 At this point we activated the GPS to get a better idea of what time we would reach our destination. It put the GPS lady into a snit because for several miles the four-lane was squeezed into two due to construction. The system couldn't recognize that we were traveling on the northbound half of a highway that is normally two southbound lanes. I've never heard "recalculating" that many times in such a short space!

The final glimpse of a waterway was at Washington NC, a small town that straddles Pemlico River. I liked the village just before we got there, named Chocowinity!

Our camping spot tonight is a small family park that has seen better days. It has a rumpled, well-used feel, but it was deemed acceptable by Good Sam directory folks, and the staff were friendly and welcoming. We are so well set up in our little home on wheels, our surroundings don't have to be fancy.
Posted by Brenda_Zanin at 5:21 PM