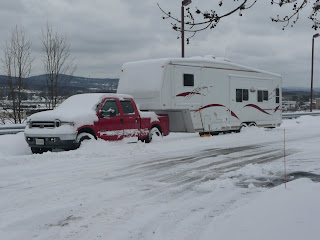 WINCHESTER, VA — We’ve just come back from a homey dinner at the Cracker Barrel down the street from our hotel; it’s a chain that specializes in down home cookin’ with a country flair. We sat near a huge stone fireplace where great logs crackled and burned, warming us from our frosty walk. The walls are decorated with old washboards, snowshoes and old farm implements. A sepia photo of a wistful woman with a high collar and wavy hair parted down the middle looked over us from her picture frame next to our table.
Our journey today took us through the Appalachian Mountains of Pennsylvania, with lots of ups and downs through forested hills, where lots of snow still blanketed the ground — but not the highway, to our relief. Every now and then we’d pass a small town of square wooden houses and pretty churches with tall spires, pristine and white with fresh snow. In the distance, the mountains really did take on a purplish hue.
Our route crossed a finger of Maryland that was only a few miles wide; we barely realized we were in that state before we were out of it again.
Val was remembering the book about Lincoln that he has been reading, which describes the Civil War and some of the battles which took place in these parts. It must have been pretty tough going for soldiers in scratchy woolen uniforms, dragging cannons through snowy brush like what we saw along the way, and trying to stay warm. We saw the signs for Gettysburg, to the east of us, as we continued south. We also crossed the famous Mason-Dixon line that divided the South from the North. Just about every town on the map around here ends in "burg" - Bloomsburg, Harrisburg, Chambersburg! Other names reflect the hilly country, using words like heights, ridge, ravine, mount.
The highways teemed with semi trucks, heading in both directions, and in the early afternoon we stopped at a rest station just inside West Virginia and pulled our rig into the parking lot next to these throbbing monsters. We actually spotted one truck, missing its long trailer, that had mud flaps stamped with the name of a car dealership in Ottawa and Kingston!
The day started sunny but gradually clouded over. We noticed once we had reached Virginia that the snow was getting sparser; more stubby grass was showing on the roadsides instead of drifts. So we are headed in the right direction! There is still snow here in Winchester, but the temperatures that are forecast for the coming days are into the fifties at least.
The picture I've attached shows what the truck and trailer looked like yesterday morning, and even as we pulled out this morning, the front and top of the trailer were covered in snow. But by the time we got here, there were only two little clumps on the roof behind the air vents; the rest had blown off or melted! The box of the truck was also completely emptied of the snow we started out with. Val says he saw a plume of snow billowing behind us as we started on our way today! Never mind, just a few days more and we won’t see any for a long, long time – we hope!
Posted by Brenda_Zanin at 5:27 PM